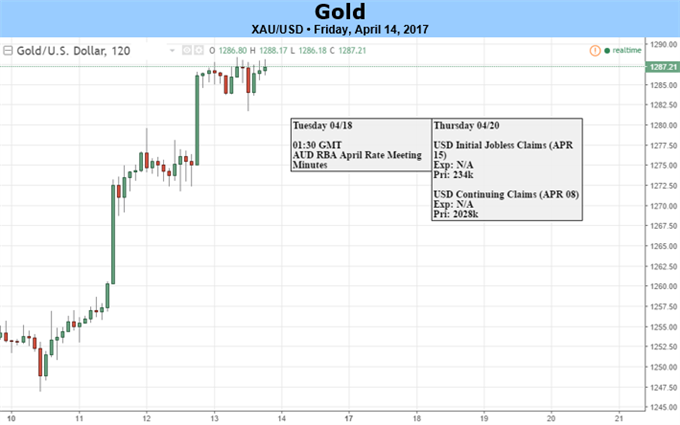 Gold prices are poised to close higher for the fifth consecutive week with the precious metal up more than 2.6% to trade at 1286 ahead of the New York close on Thursday. The advance comes amid softness in broader risk assets with global equity markets suffering minor losses ahead of the extended holiday weekend.

Comments made by President Donald Trump regarding overvaluation in the greenback further fueled the advance, taking prices through key regions of resistance on Wednesday. Despite the president’s comments, the markets seemed primed for the upcoming Fed normalization (3 additional hikes this year) and from a fundamental standpoint, the long-USD argument may be nearing exhaustion in the interim. The DXY is down more roughly 1.6% on the year and more than 3% off the yearly high. That said, while the risk does remain for further dollar losses near-term, the knee-jerk trump rally in gold is unlikely to sustain prices at these levels and leaves the immediate advance vulnerable heading into next week.

However it’s important to note that rising geo-political tensions may put a floor under prices amid the clear and present danger of mounting conflicts in Korea, Syria & Russia. Aside from these risks, highlighting the economic docket next week will be the release of the Fed’s Beige Book with an updated assessment of the central bank’s twelve districts likely to fuel speculation of the timing for the pace of future rate hikes. 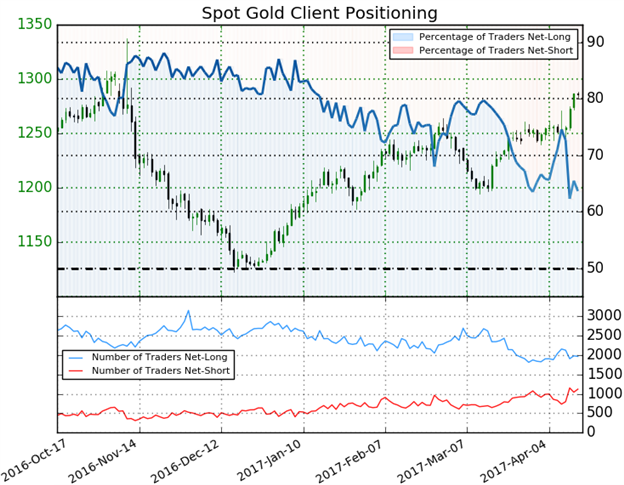 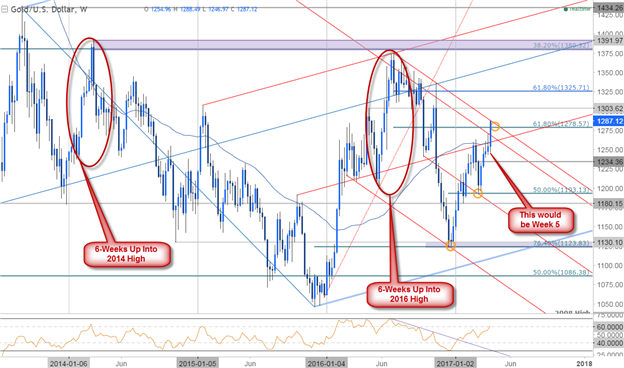 If gold were to close higher on the week (which we’re well on pace to do), it would be the fifth consecutive weekly advance. Note that the last three times we’ve seen five plus weeks (these instances saw six) were at key market reversals in price- most notably the 2014 & 2016 yearly highs. The implications are for a high in gold over the next few weeks- but at what level?

From a technical standpoint, the close of the week will be telling with a hold below basic trendline resistance extending off the 2016 highs leaving the immediate advance vulnerable. Look for initial weekly support at the 52-week moving average, currently ~1255-60. 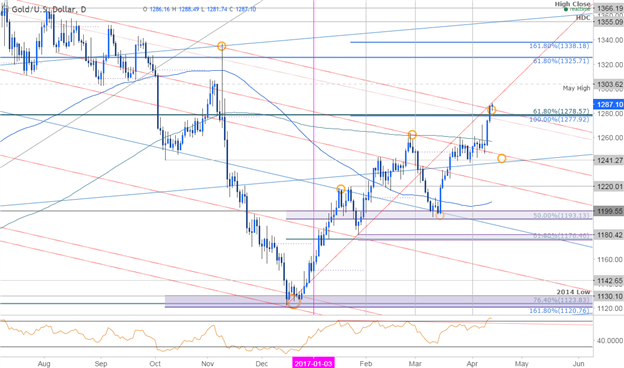 A closer look at the daily chart further shows how precarious this break is. Bottom line- a weekly close above this confluence region would be needed to validate the breakout in gold prices with such a scenario targeting the May high at 1303 backed by the 61.8% extension of the 2015 advance at 1325.

A close back below 1278 would highlight the risk of this being a failed breakout. Look for interim support back at the 200-day moving average ~1256 backed by our broader bullish invalidation level at the October low at 1241.