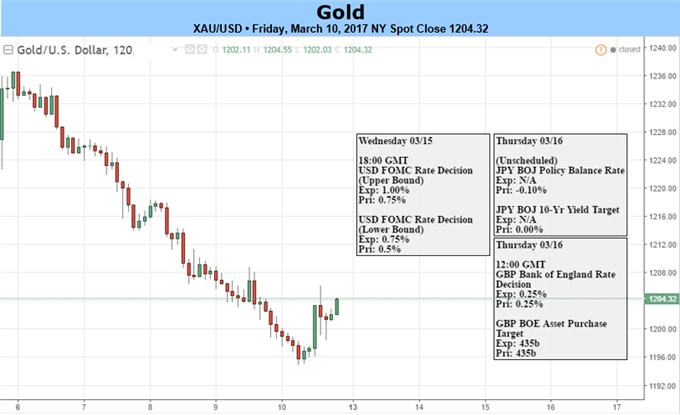 Gold prices fell for the second consecutive week with the precious metal down 2.67% to trade at 1201 ahead of the New York close on Friday. Bullion is down more than 5% off the yearly high and has been fueled by expectations for higher borrowing costs from the Fed. Heading into next week, the quarterly FOMC policy meeting will be central focus with gold approaching key near-term support targets of interest.

U.S. Non-Farm Payrolls released on Friday topped expectations with a print of 235K as the unemployment rate fell to 4.7%. The move was accompanied by an uptick in the broader labor force participation rate, a welcomed shift the central bank will likely consider heading into next week’s critical rate decision.

With a 25 basis point rate-hike already priced-in for March, market participants will be focused on adjustments in the interest rate dot-plot as the central bank appears to be on course to further normalize monetary policy in 2017. Officials have noted three or even four rate-hikes could be appropriate this year as the Fed 'closes in' on its dual mandate. As long as the Fed stays on course, gold prices remain vulnerable to further losses- that said, the broader technical outlook remains tilted to the downside with near-term rebounds to offer potential short-entries. 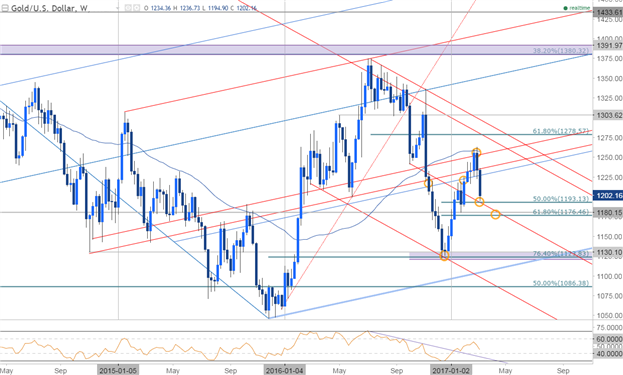 Initial weekly support is eyed into 1193 backed closely by a more significant confluence region at 1176/80 (61.8% retracement of the December advance and the 2013 low) - This is a key region of support and an area of interest for near-term exhaustion / long-entries. Broader resistance now stands with former slope support which converges on the yearly high-week close at 1234. 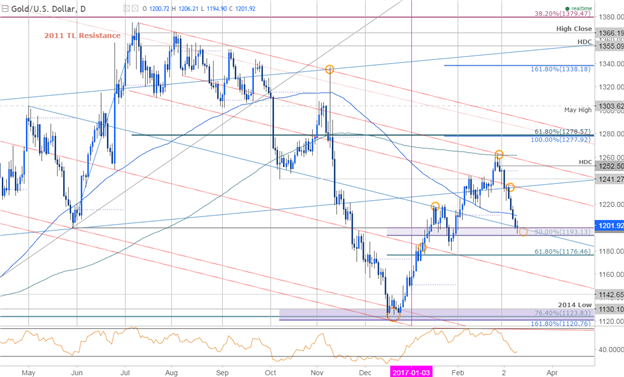 A closer look at the daily chart further highlights this near-term support zone and while the broader technical outlook has turned over, prices could see a reprieve off these levels (especially on a dip 1176/80). From a trading standpoint, I’ll be looking for strength early in the week to offer favorable short-entries while below confluence resistance at 1234.