Gold Weakness to be Viewed as Opportunity- US CPI on Tap

Gold Weakness to be Viewed as Opportunity- US CPI on Tap 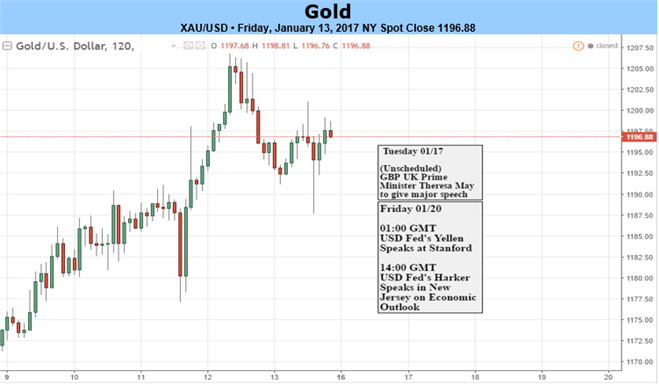 Gold prices are higher for a third consecutive week with the precious metal up 1.8% to trade at 1194 ahead of the New York close on Friday. The rally comes alongside continued weakness in the greenback with the DXY posting its largest weekly decline since October. While the risk remains for further losses, building interest rate expectations & near-term technical support in the index suggests we may see a reprieve in the greenback. For bullion, the implications are for a near-term setback after prices responded to resistance earlier this week with the broader focus still weighted to the topside.

Looking ahead to next week, traders will be eyeing inflation data out of the US with the December Consumer Price Index (CPI) slated for Wednesday. Consensus estimates are calling for an uptick in the headline print to 2.1% y/y from 1.7% y/y, with Core CPI (ex food & energy) widely expected to hold at 2.1% y/y. Look for stronger inflation data to stoke interest rate expectations on a beat with such a scenario likely to cap gold advances in the near-term. Note that Fed Fund Futures have seen a slight uptick across the board with markets now pricing a 70% probability for a June rate hike. 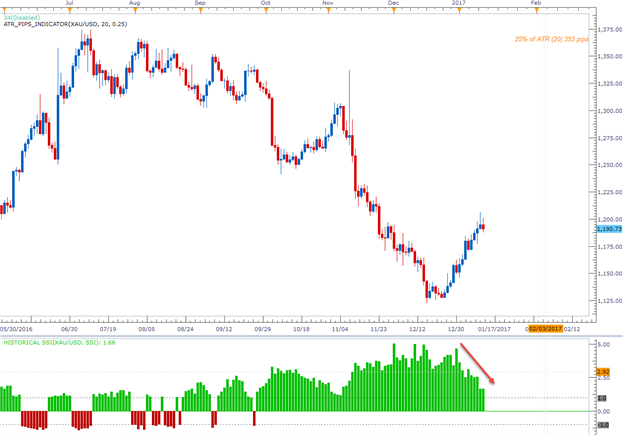 A summary of the DailyFX Speculative Sentiment Index (SSI) shows traders are net long Gold- the ratio stands at +1.66. It’s important to note that SSI has continued to narrow from the 2016-extreme of +5.02 and has been accompanied by a marked change in price behavior. That said, I’ll be looking for a continued build in short exposure / a flip to next short to suggest a that more significant low is in place. 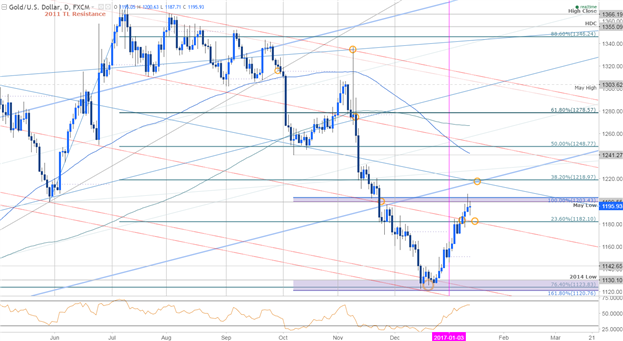 Last week we noted a topside bias while above the monthly / yearly open at 1150 with a breach higher eyeing “confluence resistance targets at 1200/03 & 1215/15- both areas of interest for possible exhaustion / short-entries.” This week’s high registered at 1206 before pulling back sharply on Thursday.

Heading into next week, things get a bit dicey for gold. We can’t rule out a run on critical confluence resistance just higher at 1218, but we’ll generally be looking for an exhaustion pullback in prices with near-term support eyed at 1182. Broader bullish invalidation now raised to the 50% retracement of this advance at 1164- area of interest for exhaustion / long-entries.