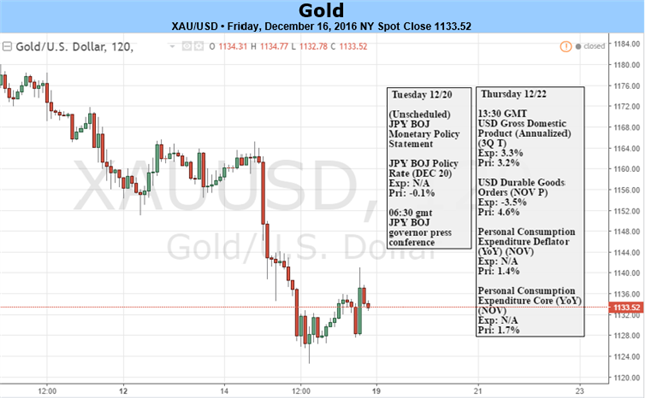 Gold prices fell for the 6th consecutive week with the precious metal down 1.8% to trade at 1137 ahead of the New York close on Friday. The losses come amid renewed strength in the greenback with the DXY climbing to fresh 14-year highs after the FOMC moved to raise interest rates for only the second time in 10years. While the prospects of higher rates are a headwind for gold, prices are responding to a critical barrier off near-term support and heading into next week, the short-bias is at risk whilst above 1120.

Although the rate-hike was widely anticipated, slight upward revisions to the Fed’s growth & inflation forecasts were overshadowed by and uptick in the committee’s interest rate dot plot with officials now calling for 3 hikes next year. The release prompted a repricing off expectations, fueling a massive rally in the U.S. dollar as lower yielding ‘haven’ assets like gold came under pressure. That said, the first hike isn’t expected until the second half of the year and the recent rally in the greenback may be a bit overdone here. (Keep in mind we came into 2016 expecting three hikes and got just one). Although the implications for higher rates are likely to weigh on yellow metal, prices are responding to a key technical threshold which may offer a near-term reprieve to the most recent bout of selling. 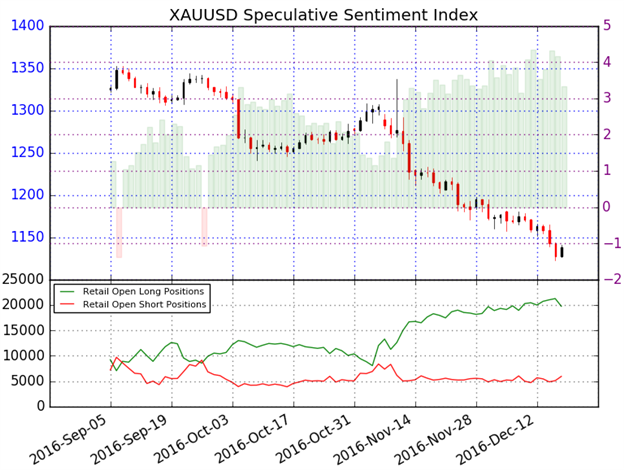 A summary of the DailyFX Speculative Sentiment Index (SSI) shows traders are net long Gold- the ratio stands at +3.33 (77% of traders are long) – bearish reading. Long positions are 5.4% below levels seen last week while short positions rose 20.4% over the same period. Market participation remains firm, with open interest at 4.9% above its monthly average. It’s important to note that SSI has continued to narrow from the 2016-extreme of +3.59 and highlights the threat of near-term exhaustion in sentiment / price. That said, the recent pullback in SSI suggests that the immediate downside bias is at risk as price approaches critical support. 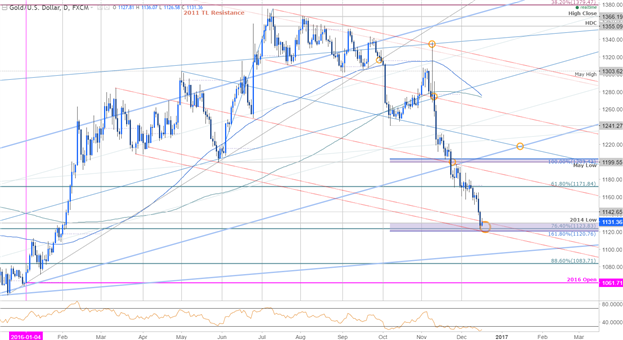 Gold prices tested a critical support barrier this week at 1120/30 – this region is defined by the 161.8% extension of the decline off the yearly highs, the 76.4% retracement of the advance off the 2015 low, the 2014 low and the lower parallel of the embedded descending parallel formation. Bottom line if gold is going to find some relief, this is a good place to look- I’ll be looking for a reaction against this level heading into next week with interim resistance eyed at 1142 & 1171/81. Bearish invalidation remains up at 1200/03.

A break lower from here risks substantial losses for bullion with such a scenario targeting the lower parallel extending off the 2015 low ~1095 backed closely by the 2015 low-week close / 88.6% retracement at 1083/85 and the yearly open at 1062.