Gold Prices: Calm Before the Storm as Focus Shifts to FOMC, NFP 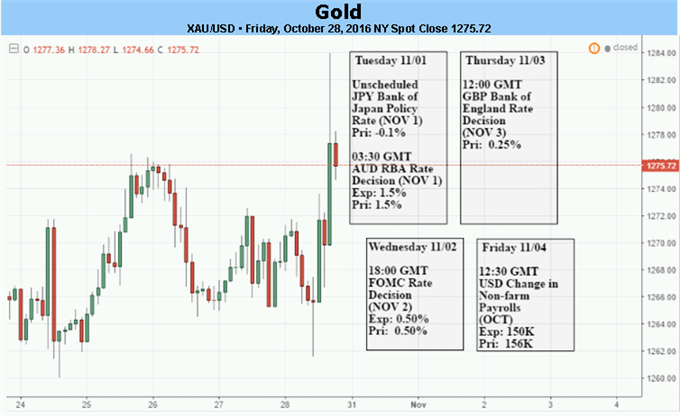 Gold prices were fractionally higher this week with the precious metal up nearly 1% to trade at 1275 ahead of the New York close on Friday. Prices have continued to hold within a tight trading range of less than 3% since the October 4th sell-off as an increase in offshore demand is offset by expectations for higher rates from the Fed later this year. Heading into the start of November trade, all eyes are on a break of this consolidation range.

U.S. 3Q GDP figures released on Friday showed the economy grew at an annualized pace of 2.9% q/q, topping estimates for a print of just 2.6%. The Core Personal Consumption Expenditure, (PCE), the Fed’s preferred gauge of inflation, also beat consensus with a print of 1.7% q/q. Still, the data is unlikely to move the needle for the monetary policy outlook, with Fed Fund Futures still pricing in just a 17% chance of a hike this month as expectations for a December rate-hike hold decision steady at nearly 75%. For gold, the implications are for more sideways price action with next week’s event risk likely to charge considerable volatility in prices.

Highlighting the economic docket next week are key central bank rate decisions with the RBA, BoJ, BoE & the FOMC on tap ahead of Friday’s U.S. Non-Farm Payrolls report. Also note that next week marks the open of November trade with the U.S. elections in view just one week later. That said, expect volatility – Gold price action may largely take cues from USD price action and with the DXY reacting to a key resistance confluence late in the week. We’ll take a more neutral stance heading into the start of the month while noting a broader downside focus sub-1303. 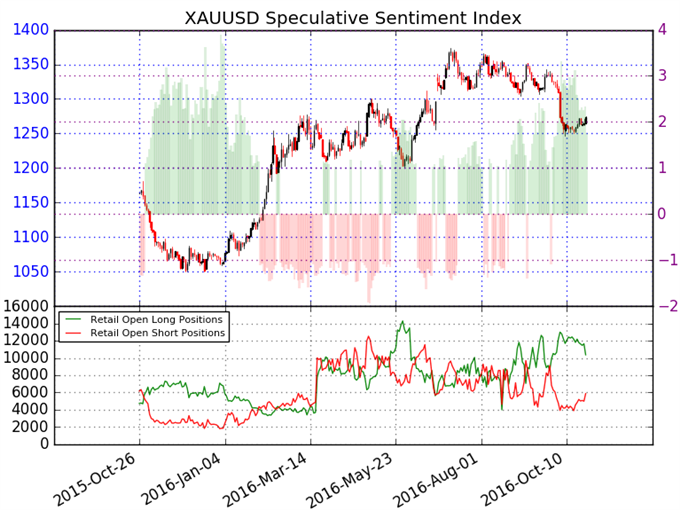 A summary of the DailyFX Speculative Sentiment Index (SSI) shows traders are net long Gold- the ratio stands at +1.86 (65% of traders are long)-bearish reading. Long positions are 8.2% below levels seen last week while short positions are 0.1% higher over the same time period. The pullback in long exposure softens the strength of the bearish signal and while the broader risk remains lower, the recent dynamic suggests prices may continue to consolidate in the near-term before resolving this range into a new low. 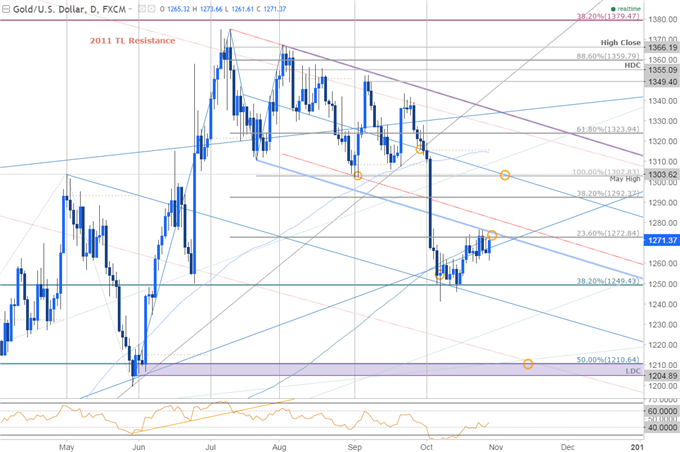 The technical outlook remains unchanged from last week as prices continue to hold just below former slope support, now resistance. Note that this trendline converges on the 200-day moving avergae as well as a basic 23.6% retreacement of the decline off the yearly high at 1273 and will serve as our near-term bearish invlidation level. A breach higher targets 1292 & key resistance at 1303.

Interim support rests at 1249 with a break below the median-line extending off the May high needed to fuel the next leg lower targeting the lower parallels & key support into 1204/10- an area of interest for possible exhaustion / long-entries.From a trading standpoint, I would be looking for a break higher in this recovery fade into more meaningful structural support where prices could mount a more aggressive counter-offensive.