Gold Prices Primed for Volatility- All Eyes on Jackson Hole 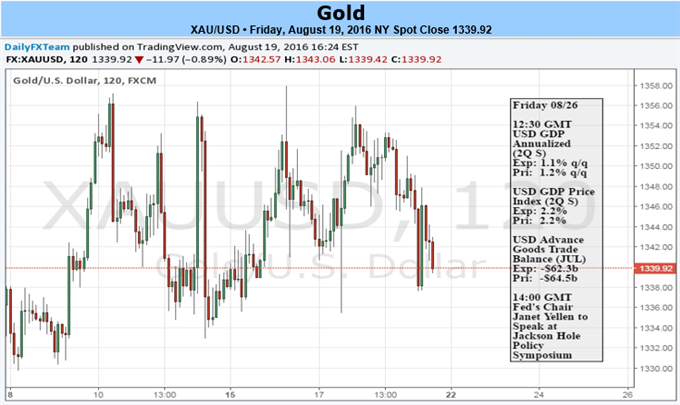 Gold prices were relatively flat this week with the precious metal up just 0.57% to trade at 1343 ahead of the New York close on Friday. The move was accompanied by a decline in the greenback with the U.S. Dollar Index down 0.60% on the week after posting a 0.35% recovery on Friday. As

A fresh batch of central bank rhetoric this week saw a shift in interest rate expectations after San Francisco Fed President John Williams cited that, “Despite the very real struggles that some parts of the country, including Alaska, are facing, the broader national economy is in good shape: We’re at full employment, and inflation is well within sight of, and on track to reach, our target. Under these conditions, it makes sense for the Fed to gradually move interest rates toward more normal levels.” At the same time, New York Fed President William Dudley noted that markets were underpricing the likelihood of an interest rate hike while leaving the door open for a move in September. As it stands, Fed Fund Futures are pricing in a 53% probability the next hike will be in December of this year. The implications for higher borrowing costs have continued to put a damper on gold prices, capping the advance near-term.

Heading into next week, Durable Goods Orders & the second revision of U.S. 2Q GDP will be overshadowed by the annual Jackson Hold Economic Policy Symposium. Federal Reserve Chair Janet Yellen is scheduled to speak on Friday and on the back of this week’s central bank commentary, investors will be looking for clues as to the Chair’s willingness and readiness to move on rates despite global efforts to provide further monetary stimulus. For gold, the technicals are clear that a surge in volatility is likely on the horizon for prices heading into the close of the month. 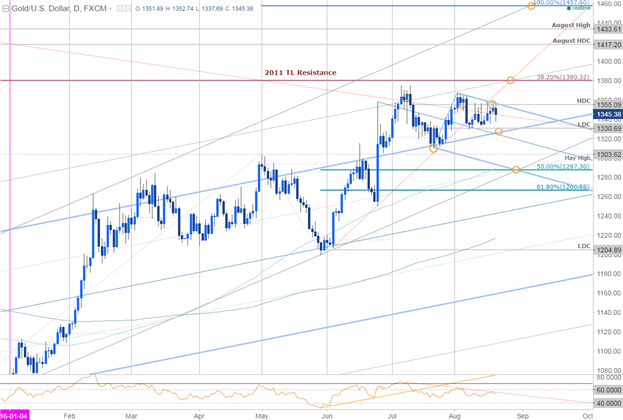 From a technical standpoint, the outlook remains unchanged from last week, “While the broader outlook remains weighted to the topside for gold, it’s unclear as to whether or not the correction off the July highs has run its course….prices continue to hold below key long-term trendline resistance extending off the record 2011 high. This week’s range ties for the smallest weekly range of the year- the last time was the week ending 7/22 (was the low for the month).”

Interestingly enough, this week’s range was even smaller at just 1.76% - (smallest weekly range since 12/25/2015). The last time range was this contracted was just one week before the 2016 open which marked strongest quarterly rally since 3Q of 1986. That’s all to say that gold prices are primed for volatility in the coming weeks. We’ll maintain a neutral bias for now as we continue to hold the monthly opening range. Levels remain unchanged.

Prices remain at, “risk for further losses while below the high-day close at 1355 with interim support seen at 1325/30. We’ll be looking for a break of the objective monthly opening range with a break lower targeting 1303 & a more significant support confluence at 1287 where the 50% retracement of the late May advance converges on a pair of median-lines – Both areas of interest for possible short-side exhaustion / long-entries… ultimately we’re looking higher in gold with a breach above near-term downtrend resistance targeting 1380.” Continue to track this trade throughout the week on SB Trade Desk.