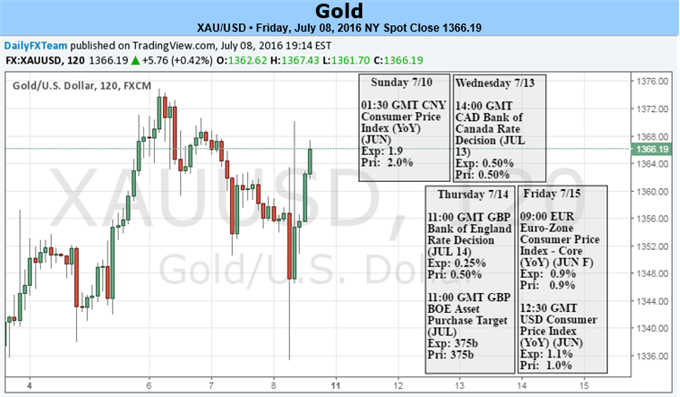 Gold prices advanced for a sixth consecutive week with the precious metal up more than 0.9% ahead of the New York close on Friday. Although bullion closed firmer on the week, prices were well off their highs after a strong U.S. Non-Farm payrolls report on Friday quelled fears of a slowdown in labor markets.

Some traders may be asking, ‘why is gold so strong in the face of rising equity prices and a stronger dollar?’ The answer may not be clear cut, but the recent rise does suggest that although inflation indicators remains subdued, markets have continued seek an alternative to fiat currencies as the efficacy of monetary easing diminishes. With central banks around the world pushing policy into unchartered territory, investors may continue to seek the perceived safety of bullion amid the weakening outlook for global growth and rising geopolitical tensions.

Looking ahead to next week investors will be closely eyeing incoming U.S. economic data with June retail sales & the consumer price index (CPI) on tap. It’s important to note that inflation remains the laggard of the Fed’s dual mandate and as such, special emphasis will be put on the CPI figures next week and their possible impact on central bank policy. As is stands, Fed fund futures have priced out chances for a Fed rate hike until December of 2017- helping keep gold prices on proper footing. 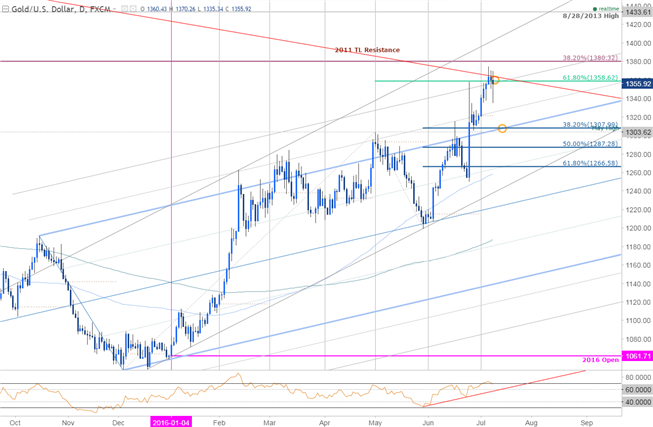 From a technical standpoint, gold failed to close above a critical resistance confluence at 1358 and the risk heading into next week is for a near-term pullback in the metal. This level is defined by the 61.8% extension of the advance off the 2015 lows, the 1.618% median-line parallel of the ascending structure and a longer-term trendline resistance extending off the 2011 record highs.

Interim support rests at the monthly open at 1321 with key support & near-term bullish invalidation set to 1303/08 where a basic 38.2% retracement of the late May advance converges on former median-line resistance- an area of interest for possible exhaustion / long-entries. A breach above resistance at the 38.2% retracement of the 2011 decline at 1380 would be needed to clear the way for a rally up towards channel support / August 2013 high at 1443. Bottom line: although the broader outlook remains constructive, prices remain vulnerable near-term heading into next week while below this key resistance region with a pullback likely to offer more favorable long entries. Continue to track this trade throughout the week on SB Trade Desk.

Canadian Dollar May Lose Ground Even as the BOC Delivers
Advertisement