Gold Prices to be Driven by Yellen Testimony, Brexit 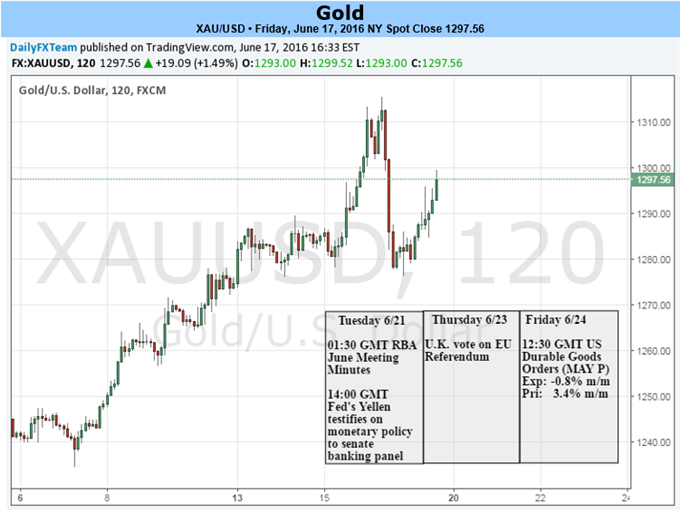 Gold Prices rallied for a third consecutive week with the precious metal up more than 1.25% ahead of the New York close on Friday. The advance comes on the back of a fresh batch of dovish rhetoric from the FOMC with the committee lowering its growth projections as well as narrowing expectations for higher rates. The move prompted a reversal in the greenback with the U.S. Dollar Index (Ticker:USDOLLAR) off by 0.56% on the week.

During this week’s FOMC monetary policy press conference, Chair Yellen took a much more dovish tone on the trajectory of policy on the back of last month’s dismal Non-Farm Payrolls print & continued concerns over the upcoming Brexit vote – a topic Yellen admitted was a factor discussed in keeping rates unchanged this time around. Fed Fund Futures have now pushed out expectations for higher rates past February of 2017. The downward revisions & cautionary tone has market questioning whether or not the central bank really has a grasp on the current headwinds facing the economy with gold likely to remain well supported as suspicions of a global slowdown continue to fuel demand. That said, prices are coming off a major region of resistance here and the immediate long-bias is at risk heading into next week.

Looking ahead, traders will be fixated on the upcoming UK referendum as well as the semi-annual Humphry Hawkins testimony with Fed Chair Janet Yellen. On the back of this week’s rate decision, Yellen’s testimony before the Senate Banking Committee on Tuesday and the House Financial Services Committee on Wednesday will be closely scrutinized as market participants attempt to ascertain both the timing and scope for Fed normalization amid the ongoing “uncertainty” she so passionately expressed on Wednesday. All eyes will be on the Brexit decision next Thursday and gold will likely see some serious volatility should voters choose to leave the EU. The immediate 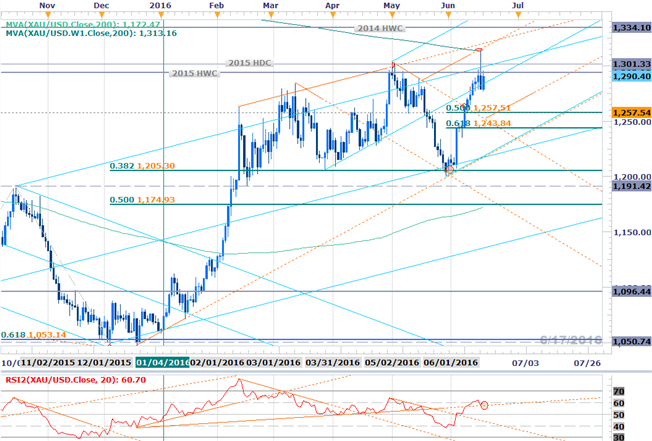 Last week I noted, “a general long-bias favored while above this week’s low at 1235. A breach higher from here targets subsequent topside objectives at 1293 & 1301 (2015 high-week & high-day closes) with more significant resistance seen at the convergence of the 200-week moving average and a sliding parallel extending off the February high.” Indeed this week saw price reverse sharply off the moving average, posting an outside-day reversal candle off resistance. While this occurrence is a bearish formation, gold failed to break below the basic weekly opening-range lows and we’ll be looking for a break sub-1271/73 to validate a near-term reversal in the pair targeting 1257 & 1244- both levels of interest for possible exhaustion / long entries.

Resistance targets remain unchanged with a breach / close above 1301 needed to keep the broader long-bias in play targeting the 200-week moving average at 1313 & the 2014 high-week close at 1334. We’ll maintain a more neutral stance heading into next week’s critical Brexit vote & Fed testimony with the general outlook calling for near-term weakness in gold prices to offer more favorable long-entries into confluence Fibonacci support targets. Continue to track this trade throughout the week on SB Trade Desk.