Gold prices are softer this week with the precious metal off 0.21% to trade at 1290 ahead of the New York close on Friday. The losses come alongside weakness in global equity markets with all three U.S. major indices closing lower on the week as the U.S. Dollar reversed sharply off key technical support. Although the broader outlook for gold remains constructive, the near-term technical picture leaves our topside bias vulnerable with a growing likelihood that prices may yet correct lower before resumption of the uptrend off the 2015 low.

U.S. Non-Farm Payrolls released on Friday showed a gain of just 160K, roughly 40K shy of market expectations with the unemployment rate holding steady at 5.0%. An unexpected downtick in labor force participation was also noted with the rate dropping to its lowest levels since January at 62.8%. Highlighting the disappointing report was a stronger-than-expected uptick in average hourly earnings which grew 2.5% y/y, up from 2.3% y/y. Despite the strength in the wage growth, the bar remains high for the FOMC amid going global headwinds with Fed Fund Futures now kicking out expectations for the next interest rate hike past February of 2017. As such, the gold losses are likely to be tepid as investors price in a longer-than-expected pause in the central bank’s normalization cycle.

Looking ahead to next week, traders will be eyeing incoming data on Retail Sales and the May preliminary University of Michigan Confidence surveys. On the back of this week’s labor report, a fresh batch of Fed rhetoric from the likes of Boston President Eric Rosengren, Cleveland President Loretta Mester and Kansas City President Ester George (all voting members) will be in focus with the primary emphasis remaining on the timing for subsequent interest rate hikes. Remember, lower rates are a drag for the greenback & in turn should keep a floor in gold- especially if the risk outlook turns bleaker in broader equity markets. 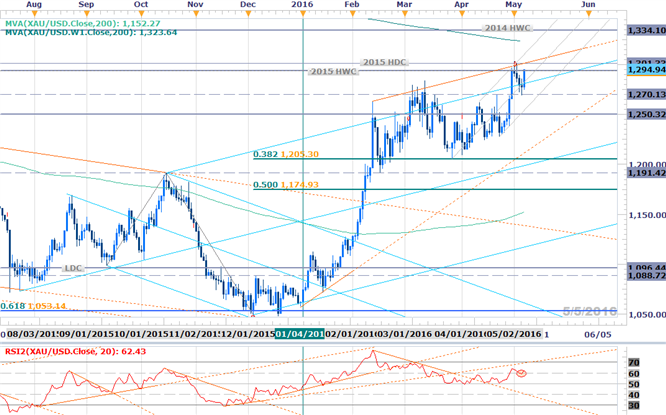 We’ve been tracking this trade for weeks on SB Trade Desk and from a technical standpoint, the long-bias remains vulnerable near-term after reversing off confluence resistance at 1301 at the start of the month. Interim support remains at 1270 backed by the March high-day reversal close at 1250. A break below this level would be needed to mark a more meaningful correction in the metal with the broader topside bias in play while above the median-line extending off the July 2015 low / 1205. A breach above the sliding parallel (red), eyes subsequent topside objectives at the 200-day moving average at 1152 and the 2014 high-week close at 1334. Bottom line, I’d be looking for a new low heading deeper into the month to offer more favorable long entries.