Gold prices surged to the largest weekly gain of the past 11 weeks on the heels of the Fed doing nothing. The FOMC closed out their 2 day meeting this past Wednesday by keeping the target interest rate steady. The Fed tried to keep market participants thinking about future rate hikes only to be brushed aside for now. Fed Funds futures are pricing in a 12% probability of a rate hike in June and a 44% probability of a rate hike by September. These figures are markedly lower following the FOMC meeting this past week.

Since we have US elections later this year, it seems logical the Fed may want to change rates prior to the election (before September) or in the new calendar year to stay away from election time. The market, by virtue of Fed Fund futures is pushing out the hike until 2017 with only a 44% chance of a hike by September. This brought a nice tail wind to gold prices.

This week, we have seen the nominal US 5 year and nominal US 10 year yield drop a little. At the same time, inflationary pressures appear to be building. I was reading a speech by the Fed Banker Robert Kaplan where he talks about the Trimmed Mean PCE (a form of inflation gauging) bumping up in 2016 to 1.8% and 1.9% whereas it was 1.6% and 1.7% in 2014-2015. As a result, gold prices appear supported for now.

Will the US economy add jobs as expected? That is a question to be answered on Friday May 6. US Non-Farm Payrolls are set to be released and the market is anticipating that 215k jobs were added. If the market sees the jobs report as an inflationary number, then we may see gold price sell off. This, in my opinion, would be the resulting recognition that inflation is trying to bubble up and rate hikes may come sooner. If the market sees the jobs report as a disinflationary figure, Gold prices may continue to bump higher. 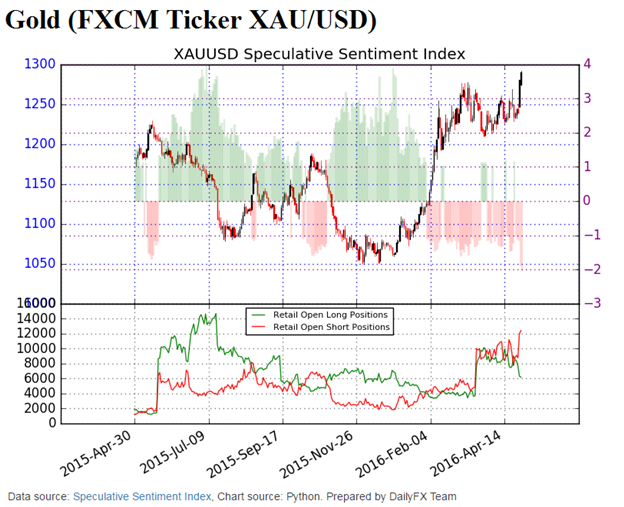 One last data point we’ll be keeping an eye on is real time trader positioning. We have seen unusually large shifts in FXCM’s SSI indicator for Gold (FXCM Ticker: XAU/USD). The SSI ratio has grown negative from +1.1 to the current -2.1. We’ve seen the number of traders positioned long drop 29% from last week and the number of short traders grow 61% since last week…a large divergence! The traders are not believing this break out higher.

Those familiar with sentiment trading will know it is used as a contrarian type of signal. So as the number short traders grows, we’ll look for buying opportunities. There is a wave relationship up near $1305 so a break above there opens the door for a continuation higher. The $1305 zone may also offer some temporary resistance. Therefore, keep an eye on real time SSI for clues about the near term move.