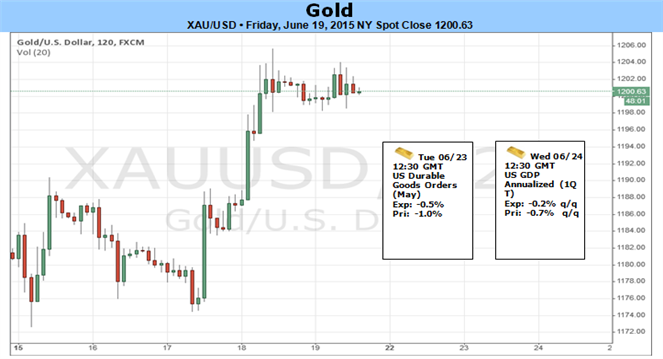 Gold prices are higher for a second consecutive week with the precious metal up 1.85% to trade at $1203 ahead of the New York close on Friday. The advance comes amid sharp declines in the greenback with the Dow Jones FXCM U.S. Dollar Index (Ticker: USDOLLAR) down 0.71% on the week following the FOMC’s June 17 interest rate decision. With central bank officials lowering their latest projections on growth and interest rates, the greenback remains vulnerable amid the ongoing batch of mixed data prints coming out of the world’s largest economy. As a result, another round of disappointing developments may fuel speculation for a further delay in the Fed liftoff.

Event risk next week mounts with the release of the final read on 1Q GDP & Core Personal Consumption Expenditure (PCE). On the back of the unexpected slowdown in consumer price growth, the core PCE - the Fed’s preferred gauge of inflation - may heavily impact the near-term outlook for the gold if the data undermines the central bank’s commitment to achieve the 2% inflation target over the policy horizon. In turn, a more dovish tilt to the outlook for monetary policy may heighten the appeal for the precious metal amid the risk that the Fed will have little choice but to retain the zero-interest rate policy into the end of 2015. Look for gold to benefit on softer data as interest rate expectations are pushed out with prices closing the week just below the monthly high / near-term resistance.

From a technical standpoint, gold has continued to trade within the confines of the initial June opening range with this week’s rally testing resistance into 1204/05. This region is defined by the monthly ORH & the 61.8% retracement of the decline off the May high. A median-line extending off the May high also crosses this region with a breach above eyeing resistance objectives at 1218 & 1225 where the May high-day close converges on the 50% retracement of the 2015 trading range. The trade remains constructive above interim support at Thursday’s low (1183) with only a break below ML support off the monthly low (~1174) putting the broader short bias back into focus.