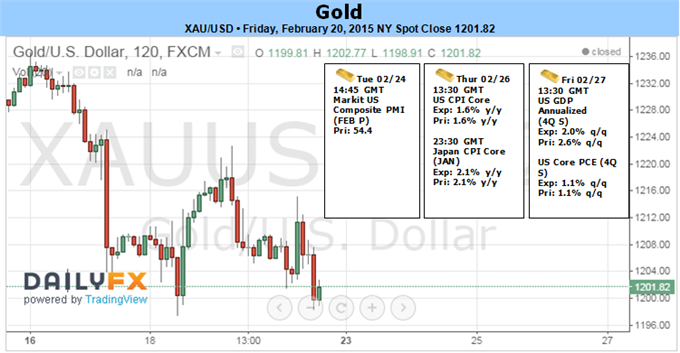 Gold prices are lower for a fourth consecutive week with the precious metal off more than 2.4% to trade at $1199 ahead of the New York close on Friday. Despite the losses, gold is poised to close the week well-off the lows after rebounding off key support mid-week with the greenback on the defensive as the USDOLLAR index posts its third consecutive weekly decline.

Minutes from the latest FOMC policy meeting cited a more cautious tone from the committee with “many officials” inclined to maintain the central bank’s zero interest rate policy amid concerns over the strengthening dollar and “foreign weakness” from the likes of China, the Middle East, Ukraine and Greece. The release prompted a rebound in gold prices which were trading into a critical support region as expectations for a June rate hike diminished. While the technical damage done to gold this month cannot be overlooked, near-term the shift in Fed rhetoric could continue to offer gold a reprieve from the recent selling pressure.

Looking ahead to next week, traders will closely eying key US metrics with January CPI, durable goods orders, and the second read on 4Q GDP. The most significant event risk will likely be on Tuesday when Federal Reserve Chair Janet Yellen testifies before the Senate Bank Panel in Washington. Look for any weakness / downward revisions in the data or more dovish comments from Yellen to prop up gold as investors push out expectations for Fed normalization. We’ll also be watching the developing story in Greece with the current bailout set to expire at the end of the week. With news on Friday affirming that an initial four-month extension has been granted, the focus will remain on US data and the central bank interest rate outlook heading into next week.

From a technical standpoint, gold rebounded off key support this week at the $1196/98. This level is defined by the confluence of the 61.8% retracement of the November advance & the 1.618% extension of the decline off the January high and is backed closely by a basic trendline support off the November low. We’ reserve this region as our near-term bullish invalidation level and although the broader bias remains weighted to the down-side, near-term this structure may offer stronger support. Note that daily RSI is holding just above the 40-threshold and we’ll use pending resistance trigger as validation of either a near-term recovery higher into the close of the month, or a material break sub 1196. Such a scenario targets subsequent support targets at $1171 & $1155. Interim resistance (near-term bearish invalidation) stands at $1218/24 with a breach above targeting $1239/40. Bottom line: looking for a low early next week with a general topside bias in play near-term while above $1196/98.