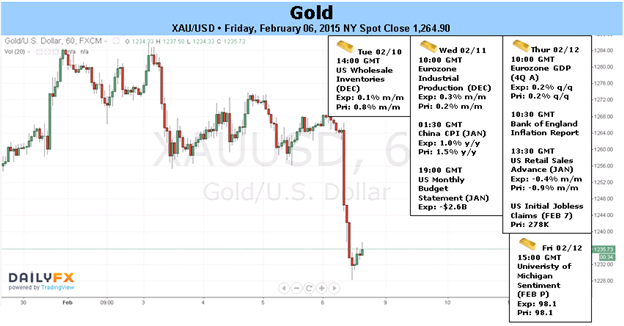 Gold prices plummeted this week with the precious metal off more than 4% to trade at $1231 ahead of the New York close on Friday. The losses come on the back of a stellar US employment report with shifts in interest rate expectations propping up the greenback at the expense of the yellow metal. Gold now looks to test a key support structure with the technicals suggesting that shorts are at risk near-term.

The November Non-farm Payroll report released on Friday showed the US economy adding 257K jobs last month, far surpassing the expectation for a print 228K. The move was accompanied by a massive upward revision to the previous month’s data from 252K to 329K with average hourly earnings topping expectations across the board. Although the unemployment rate did unexpectedly rise to 5.7%, the move comes alongside a 0.2% increase in the labor force participation rate, which was off its lowest levels since the late 1970s. The U.S. Dollar surged across the board with the Dow Jones FXCM Dollar Index paring nearly the entire weekly decline. Still, the index remains in a precarious position, holding just below the 2009 high.

Gold plummeted 2.5% on Friday as expectations for a Fed interest rate hike later this year were re-affirmed. Looking ahead to next week, traders will be looking for more updates on the US consumer with advanced retail sales and the preliminary University of Michigan Confidence Surveys. Should the data continue to top estimates, look for gold to remain on the defensive as the luster of the yellow metal wanes amid rising interest rate expectations. That said, near-term gold looks to be coming into key technical support heading into next week.

From a technical standpoint gold broke below the 200-day moving average on Friday for the first time since January 15th with the decline taking prices into the lower median line parallel of a pitchfork formation dating back to the November low. This trendline also converges on a median line off the July 2013 highs and could offer some near-term support. We’ll reserve this threshold as our medium-term bullish invalidation level with a break below targeting support objectives at $1206 & $1197. That’s said, shorts are at risk here with interim resistance seen at $1248/52 and $1268. We’ll be looking for a low early next week with our basic near-term focus higher while within the confines of the November median-line structure.