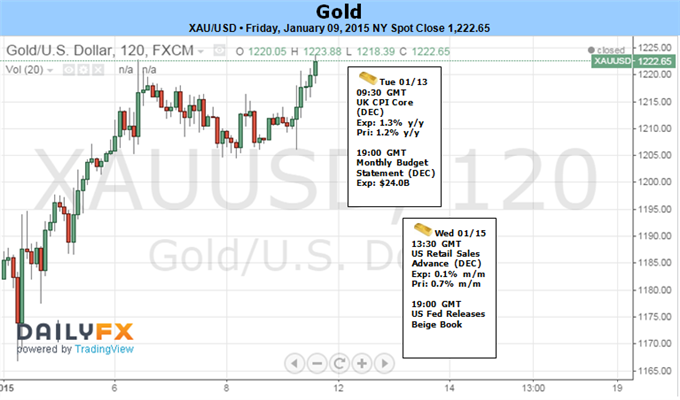 Gold prices snapped a three-week losing streak this week with the precious metal rallying 2.51% to trade at $1218 ahead of the New York close on Friday. The rally comes amid massive swings in broader risk sentiment and ongoing political uncertainty in Europe saw markets plummet early in the week before staging a strong ‘V’ recovery to pare nearly the entire decline.

Stronger-than-expected US Non-Farm Payroll (NFP) numbers on Friday offered little support for the greenback. which had pushed into highs not seen since 2009. The headline print topped expectations with a read of 252K, with the unemployment rate slipping to an annualized 5.6% from 5.8% the month prior. Yet a deeper look into the report showed the labor force participation rate unexpectedly falling from 62.9% to 62.7%- last year’s low and a level not seen previously since the late-1970s. The data suggests that the recent contraction in the labor force may have added artificial downside pressure on the headline unemployment rate, while wage growth remains stagnant with Average Hourly Earnings marking the slowest pace of growth since 2012. Today’s data comes on the back of the FOMC Minutes from the December 17 policy meeting which showed a much more tempered interest rate expectation with regards to both the timing and scope of Fed rate hikes.

The US Dollar traded heavy into the close of the trade as profit taking alongside a more cautious read of today’s report. Looking ahead to next week, traders will be eying retail sales data, the Consumer Price Index (CPI) and the University of Michigan confidence surveys. The headline reading for inflation will be central focus as the Federal Reserve struggles to achieve price stability, and a weaker print here could offer further support for bullion prices at the expense of the greenback.

From a technical standpoint, gold continued to trade within the confines of a well-defined Andrew’s pitchfork off the March high with Friday’s advance challenging the upper median-line parallel. Interim support rests at $1206 (2013 low-day close) and is backed by the lower median-line parallel of a near-term pitchfork off the November lows, currently around $1171/80. We’ll reserve this region as our bullish invalidation level with the medium-term outlook weighted to the topside while above $1171. A breach above resistance targets objectives at $1230 and critical resistance at $1236/37. This region is defined by the 2013 low-week close, the 50% retracement of the July decline and November median-line parallel. Look for weakness early next week to open up a push higher in gold with only a break below $1171/80 putting the broader down trend back in focus.