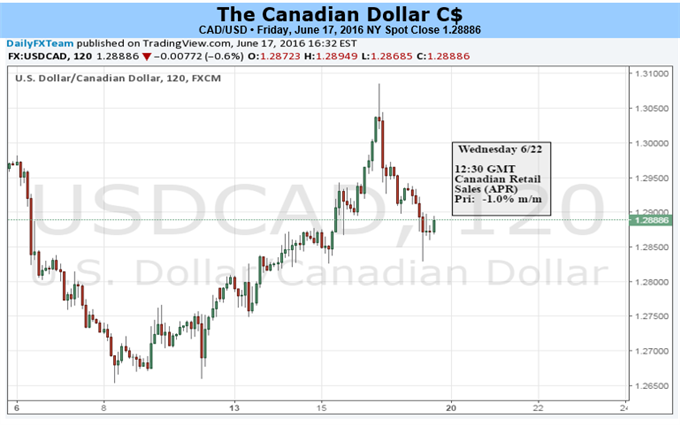 USD/CAD fell nearly across the board this week as Commodity-FX took a back seat to the volatility surrounding the British Pound ahead of the EU Referendum on Thursday as well as the overtly dovish Federal Reserve and Silent Bank of Japan.

The big fundamental news release last week was a decelerating CPI that showed a 1.5% Y/y with estimates at 1.6%. Given the significance of the disruption to relatively calm markets that could come from a ‘Vote Leave’ on Thursday, the ‘Bullish Fundamental Forecast’ will take a back seat to significant macro factors. Best case scenario for the Canadian Dollar, and likely for many commodity reliant economies is a ‘Vote Remain’ outcome is realized alongside a resumption of risk-on that benefits Oil & the Canadian Dollar.

The economic trend has impressed Canadian Dollar Bulls for most of the year. Many see the markets as a game of expectations, and the Canadian Economy continues to defy expectations albeit less so of late.

Friday’s disappointing CPI will be viewed in light of upcoming economic data as either a potential outlier in a continually robust economy or potentially the first sign of further weakening. For now, given the strength of the data and support of commodities, Canadian Dollar weakness is expected to be temporary.

Canadian Retail Sales on Wednesday comes with estimates of 0.7% MoM, and traders will additionally compare this print against the last reading of -1.0%. Given the proximity to the British Referendum (1-day before), it is unlikely that a news release within a standard deviation or two from the mean would result in a significant move for the Canadian Dollar.

A minor data point compared to the retail sales reading on Wednesday will be Monday’s Wholesale Trade Sales data. The prior print of -1.0% MoM and expectations of 0.5% will be looked to nullify or confirm the poor CPI print from last Friday.

The Federal Reserve’s 2016 interest rate path continues to underwhelm traders expecting higher yields due to a “robust” US Economy. At the start of the year, we were coming off the December hike and a Fed Dot Plot that showed four expected rate hikes from the Federal Reserve. After the June Meeting, we still see the Fed expecting 1-2 hikes for this year felt that we’d come down to two rate hikes. However, looking at the interest rate probabilities data from Bloomberg, there is not a priced in rate hike (> 50% probability of a 25bp hike) through the February 2017 FOMC meeting.

James Bullard, president of the St. Louis Federal Reserve Bank, noted on Friday that he was the low ‘Dot’ on the Fed’s notorious ‘Dot Plot.' Per Bullard, the Federal Reserve should only be looking to hike one more time until 2018. This Bearish development (which isn’t completely out of character for him) spooked USD Bulls, which provided a lift for the Canadian Dollar. 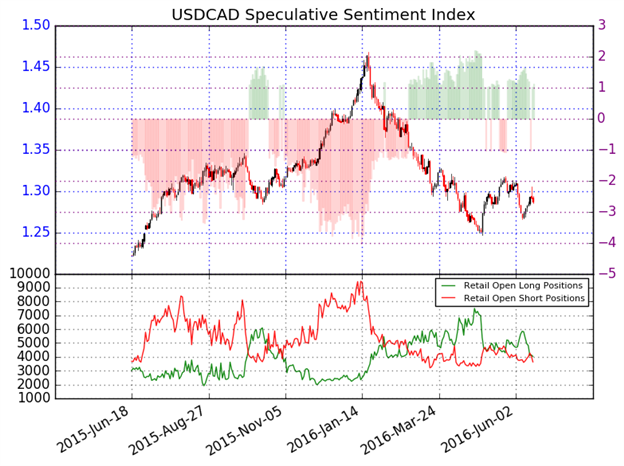 The chart above can help you see how sentiment shows turns in the market as well as acceleration points. When looking at sentiment, crowd sentiment has moved positive providing favor for more downside.

We use our SSI as a contrarian indicator to price action, and the fact that the majority of traders are long gives asignal that the USDCAD may continue lower on US Dollar weakness or Canadian Dollar strength. The trading crowd has grown further net-long from yesterday but moderated since last week.