BoC Takes a Step Back from QE to Put Focus on Fiscal Policy, Stimulus

The more that a rubber band is pulled back, the harder the corresponding snap forward will be. CAD traders saw that effect taking place in the currency markets this week. After gapping down to another new 13-year low against the US Dollar to start the week, it looked as though we were in for another week of sliding Canadian Dollar prices. And after weeks that had seen losses of -2.5% and -3% respectively against the US Dollar, little hope was in sight for any type of respite from the pain. This is a change of -5.7% in the Canadian Dollar against the US Dollar in two weeks. This may not sound very large when stock markets around the world are putting in 20%-like moves, but you have to keep this in scope: Currencies are leverage-able. Putting a trade on at 5:1 leverage would allow a 5.7% movement to become a 28.5% change in the trader’s position; and this can cut in both ways, both for and against the trader (leverage is a double-edged sword, and too much leverage is one of the most common reasons that traders fail when trading currencies). This is why stops and risk management is so utterly important when trading currencies – you choose how fast you want the trade to move based on the leverage you take on.

The Bank of Canada held a rate decision on Wednesday, and this is one of the few rate decisions of recent in which investors weren’t fairly certain of what was going to happen. Given the persistent pressure in the Canadian economy brought upon by falling Oil prices, many had begun to expect another rate cut or perhaps even an eye or allusion towards more QE. It made sense. Canada is in a unique political situation with Justin Trudeau having recently been installed as the Prime Minster of Canada largely on a platform based around fiscal stimulus. This removes pressure from Bank of Canada Governor Stephen Poloz, and we saw that flexibility come into play at Wednesday’s BoC rate decision when the bank took on a very neutral tone towards future monetary policy, alluding to the fact that the bank may be nearing the end of its easing cycle. This ‘wait and see’ approach from the bank could easily compel further intermediate-term strength in Canadian Dollars as traders unwind bearish bets after the panic-driven moves in both CAD and Oil.

So, to set this up properly: If this is successful, we may see a new model that the rest of the world can learn from. TARP and QE in the United States were largely designed and implemented to stop the bleeding in markets during and because of the Financial Collapse. For that, it worked. But for actual growth production, QE and TARP are ill-suited because there are numerous questions as to how much of that created capital is transmitted to actual consumers in an economy. And it’s not just in the United States where QE has been unable to produce lasting growth, as we’ve seen the same thing in Japan, Europe, and even Canada (which is somewhat of why we’re at where we’re at right now). For the purpose of actual economic growth in the ‘real economy,’ fiscal stimulus, by most estimations should bring far more value. Fiscal stimulus can produce jobs and once the labor force is robust enough, employers will have to increase wages to attract workers and then, we have inflation. But this is the road less traveled for a reason: Politicians generally have a hard time getting elected or re-elected by saying ‘we need to raise taxes (or take out massive amounts of debt) so that we can build jobs,’ especially when economies are already in a dire rut. This is one of the reasons that much of Southern Europe is still roiling in economic despair.

Think, Roosevelt’s New Deal versus six years of ZIRP. That’s what we could be seeing in Canada as the Central Bank takes a step back from the QE cannons to allow the government to install fiscally-designed stimulus measures. Will it work, nobody really knows. But it’s a different approach to a similar problem that the rest of the world is facing, and if it does show promise, it may be compelling enough to serve as a model to actually revive some growth in the global economy.

This move of CAD strength was further hastened on Friday when CPI numbers came out at 1.9% for core inflation (stripping of food and energy) and 1.6% for headline. Oddly, these numbers were both shy of expectations, but that didn’t stop the rampant strength that had already begun after Wednesday’s BoC Rate decision. Since that meeting, the Canadian Dollar has gained 3.64% against the US Dollar, and a whopping 5% against the Euro. This is in three days… again, huge moves in the currency world, and given the pivot by the Bank of Canada, this could certainly continue for a while.

But there is an exogenous driver here that is out of both the Bank of Canada and Mr. Trudeau’s hands, and that is the continued pain being seen in Oil prices. The CAD/Oil Correlation has continued to show a strong relationship, and this recent bout of CAD strength has been accompanied by a brisk reversal in Oil prices as well. So the pain trade in both

There’s a reason that the Canadian Dollar went into near-meltdown mode to kick off the year, and the primary reason for that is likely the ground-shaking movements seen in Oil prices. Frankly, the moves in Oil appear to have become divorced from direct supply/demand functions and are now incorporating the exogenous risk of ‘panic selling.’ This draws back to the idea of reflexivity, which is George Soros’ response to the Efficient Market Hypothesis. Mr. Soros posits that markets are least efficient after large, outsized moves; and this makes sense. Eventually selling becomes a self-fulfilling prophecy as falling prices only encourage more selling, regardless of how positive any news or data points may be. The early portion of this week felt that way in Oil as we drove further and further below the psychological level of $30.

As an example of how emotions have begun to creep into the Oil market, we’ve seen Oil prices rise by 16.2% since the low on Wednesday, and this was after a -26.6% move to open the New Year. These aren’t small amounts by any stretch of the imagination, and they’re likely far too large to be driven purely from supply and demand characteristics. This is likely a lot of short covering, leading to a large short squeeze. The reason for pointing this out is to highlight the fact that fundamentals can largely become divorced from these types of moves after the moves get aggressive enough.

Does this mean that the down-trend is over? No. But it does mean that we’re likely in for heavy volatility while Oil prices attempt to carve out a bottom. But with the data that we have from here, it doesn’t look as though that bottom has been set yet.

Due to these varied circumstances, we’re taking a neutral rating on the Canadian Dollar for next week given this shift from the Bank of Canada, but for Oil, we’re retaining our Bearish forecast as we’re likely in for more pain from Oil producers in the coming months, and that can lead to even more emotionally-driven panic selling. - JS 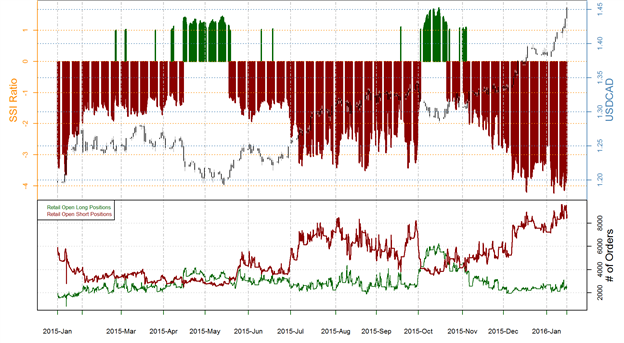