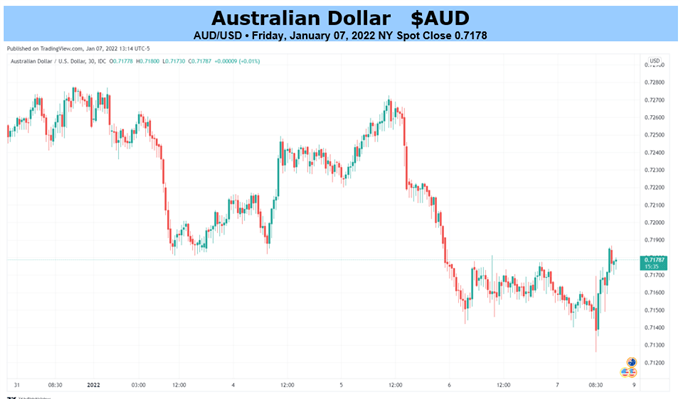 The Australian Dollar has kicked off 2022 on the defensive with the US Dollar roaring higher on the back of a more hawkish than expected Fed.

The market returned from the holiday season and immediately saw Treasury rates move higher. Some of these initial moves were viewed as positions being re-stablished.

Going into the break, there was some concern that the spread of Omicron might force the Fed to re-assess their tightening stance from the December FOMC meeting

Shorts in Treasury futures, among other positions, had been scaled back. Come 2022, it appears that many of these positions were re-entered. AUD/USD is close to the level that it was prior to the holidays.

After the positions were put back on, the market digested the minutes from the December FOMC meeting. The document showed the tightening timeline had been broughtforward.

As a result, Treasury yields have continued to rise and the interest rate differentials between Australia and the US contract. This scenario appears likely to continue until the RBA meets again in early February.

When the central bank meets, it will have inflation data for the 4th quarter. During that quarter, most of the Australian population came out of lockdown and price pressures would seem likely.

The latest data has annual headline CPI at 3.0%, equalling the top end of their 2-3% target range.

However, their preferred measure of trimmed mean is 2.1%. Any significant move in this gauge may see a change in language or an acceleration in the reduction of their asset purchase program.

With rising US yields, the US Dollar found support, mostly against high beta, growth linked currencies like AUD, CAD, NOK and NZD.

However, while this was happening, Australian export commodities continue to rise against USD or in some cases, move sideways. Most notably, increases in iron ore and energy commodity prices were seen.

In late October last year, commodity prices and interest rate differentials both turned at the same time to undermine AUD. The currency consequently depreciated to the early December low, just above the November 2020 low of 0.69913

For now, it looks like interest rate markets are working against the Aussie, while commodity exports are supporting it. 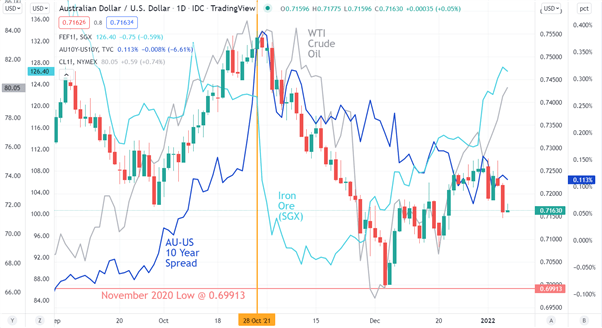