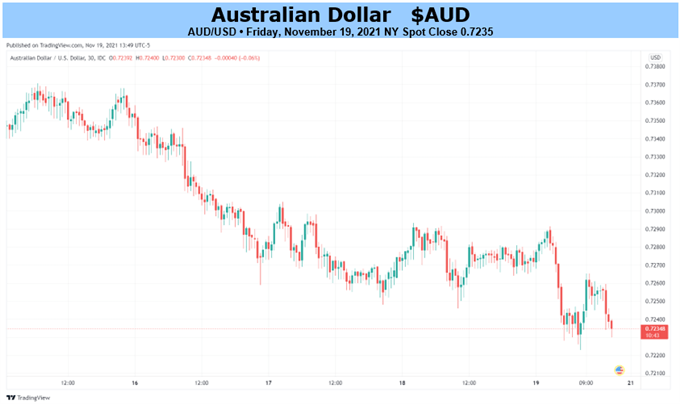 The Australian Dollar tried to gain some ground early in the week but was over awed. AUD weakness was initially due to US Dollar strength and then domestic wages data, that on the surface looked ok, but the market thought otherwise.

On Tuesday, the US Dollar shot up with US yields on the back of strong retail sales numbers and very hawkish comments from Federal Reserve Bank of St. Louis President, James Bullard.

Also on Tuesday, the RBA meeting minutes were released and then RBA Governor, Philip Lowe, spoke.

The meeting minutes didn’t deliver any surprises from the monetary policy statement two weeks before and Governor Lowe stuck to the script, despite the alluring title of ‘Trends in Inflation.’

However, he did make special mention of the importance of rising wages in the inflation equation, and this put extra focus on the wages data for the following day.

On Wednesday,the wage price index hit the wires and it rose by 0.6% for the third quarter and 2.2% for the year, in line with expectations. Although it met consensus forecasts, the Australian Dollar came under pressure due to a disappointed bond market looking for a beat.

Since the data, Australian 2 and 10-year governments bonds have shed around 10 basis points each, undermining the Aussie. Perhaps bond traders were emboldened by their previous foray, attacking the April 2024 government bond, that led to the RBA abandoning yield curve control.

Commodities have been largely sidelined for AUD/USD impacts. Iron ore has settled in a narrow range of late.

Energy commodities have generally pulled back from astonishing highs seen last month. The severeness or otherwise of the northern winter and the potential of EU-Russian brinkmanship still linger as potential sparks of volatility.

In the week ahead, retail sales are due out on Friday, but the US will see a slew of data releases, highlighted by GDP and inflation data.

It would appear that AUD/USD is likely to be vulnerable to external factors. The RBA has shown its hand and domestic economic indicators are light on.

Bond markets, both domestically and in the US, might be a catalyst for the currency to move, particularly if the spreads between the two widen or narrow significantly. Fed speakers will be a focus for markets as their path to reducing stimulus remains opaque.

Commodity markets may also re-ignite and have some say in AUD/USD direction.

The DXY Index in blue below, excludes AUD and is composed against EUR, JPY GBP, CAD, SEK and CHF.

AUD/USD AGAINST THE USD INDEX (DXY) 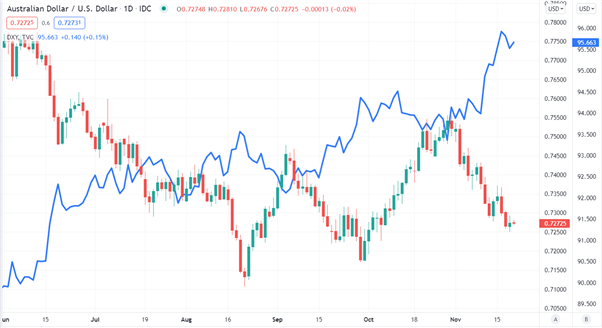