As noted in previous reports, the notable drop-off in iron ore exports to China may be behind the turn lower seen in the AUD/USD exchange rate in recent days, as overall demand drops to its lowest since late-July 2020.

This substantial reduction in exports could be due to the latest outbreak of coronavirus on the mainland, with residents in Shanghai banned from leaving the city after a six coronavirus cases were detected. An additional 47 cases were also reported in Heilongjian province on Friday.

Of course, given China’s previous success in suppressing outbreaks, it seems relatively unlikely that case numbers will markedly move higher and force restrictions to be in place for an extended period of time. 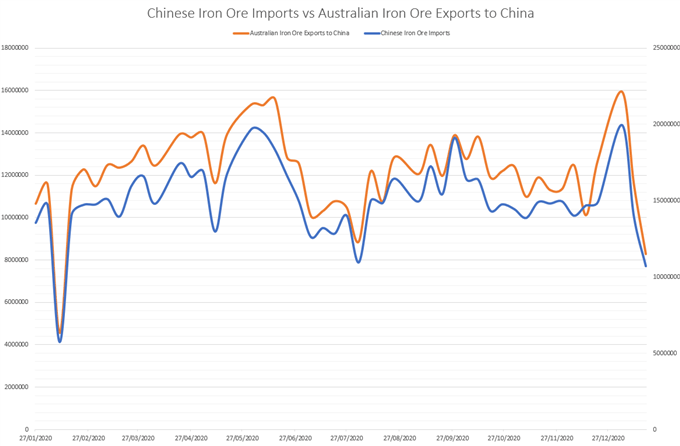 Nevertheless, with Chinese New Year celebrations just around the corner there is significant risk that domestic travel could lead to an exponential spread of the virus.

Indeed, local health authorities have warned that the latest strain has been found to “last longer, spread wider, and transmit faster, with a higher percentage of elderly and rural patients”.

With that in mind, traders should keep a watchful eye on ongoing health developments. A notable pick up in infection numbers probably results in the imposition of tighter restrictions and may ultimately limit overall iron ore demand in the near term.

From a local standpoint, the Australian economy has continued to rebound robustly, as the island nation’s successful suppression of Covid-19 has allowed a return to a level of normality.

However, preliminary retail sales figures for December registered its first drop in consumer spending since September, as an outbreak of the novel coronavirus in New South Wales and Victoria – Australia’s two most-populous states – forced the imposition of social distancing measures and restrictions.

Nevertheless, with case numbers nationwide continuing to hover in single digits, and with the majority of infected people isolated in hotel quarantine, the country’s economy looks set to sustain its recovery somewhat unabated. This may ultimately put a premium on the cyclically-sensitive currency in the coming months.

Looking ahead, Q4 inflation data will be keenly eyed by regional investors to determine the potential path forward for monetary policy from the Reserve Bank of Australia.

A larger-than-expected rise in consumer price growth would probably diminish the potential for further easing from the RBA in the near term and in turn propel the Australian Dollar higher against its major counterparts.