A fresh outbreak of coronavirus cases in Australia’s second most populous state threatens the outlook for the Australian Dollar, should the containment efforts halt the re-opening of the local economy.

With the number of coronavirus cases in Victoria rising by double digits for the last 10 days, State Premier Dan Andrews warned “what we do now will determine what comes next”.

Stressing the precariousness of the situation as “we again find ourselves on a knife’s edge”, Andrews has called upon the Australian Defence Force to assist in the ‘Suburban Testing Blitz” program that aims to conduct 10,000 test a day over the next 10-day period.

Increased testing inevitably leads to climbing case numbers and, with the Premier already deciding to delay easing of restrictions by a further three weeks, an exponential increase could result in the re-imposition of economically devastating lockdown measures. 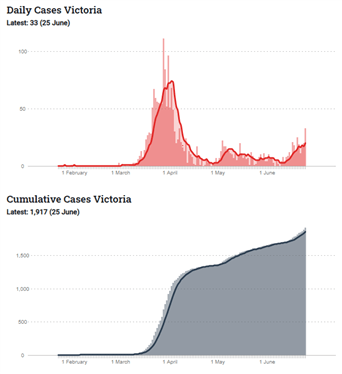 In a speech given to the Crawford School of Public Policy, Reserve Bank of Australia Governor Phillip Lowe stated he “would like a lower currency in terms of macroeconomic outcomes” as “it would help reduce unemployment and lift inflation closer to target”.

However, the Governor conceded “at the moment, I think it’s really hard to argue that the Australian Dollar is overvalued” citing “relatively good health and economic outcomes so far” as a major fact in driving the exchange rate higher.

The central bank’s stance that interest rates will remain “at their current level for years” has also contributed to the recent outperformance of the Australian Dollar, with the RBA maintaining 0.25% as the lower bound for the official cash rate and the possibility of introducing a Negative Interest Rate Policy (NIRP) “extraordinarily unlikely”.

Nonetheless, should coronavirus cases continue to climb, and the local economy struggle to bounce back as expected, the RBA may be forced to alter their position on negative interest rates.

Souring of the relationship with Australia’s largest trading partner has continued to escalate in recent weeks, resulting in the imposition of tariffs on local agricultural products and the recommendation that Chinese citizens avoid travel to Australia due to “racist incidents”.

The latest exchange has seen government sources confirm China as the culprit behind “intensifying online attacks targeting Australian organizations across a range of sectors, including all levels of government”.

Prime Minister Scott Morrision announced these cyber attacks were “ongoing” and have been intensifying since the coronavirus outbreak, although he stopped short of confirming China as the culprit.

With Beijing’s determination to have the ‘final word’ there remains a significant possibility that further escalation may be on the cards, in turn capping potential upside for the risk-associated Australian Dollar. 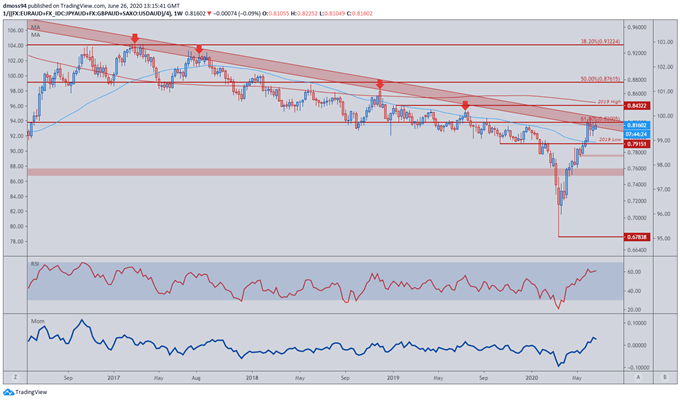 From a technical standpoint AUD remains capped by the 2012 downtrend, which has consistently acted as a pivotal inflection point for the cycle-sensitive Australian Dollar.

To that end, deteriorating fundamentals may impose increasing downward pressure on AUD against its major counterparts, and may signal the end to the commodity-linked currency’s surge to pre-crisis levels.