Australian Dollar Shows Some Rare Resilience, May Hold Up 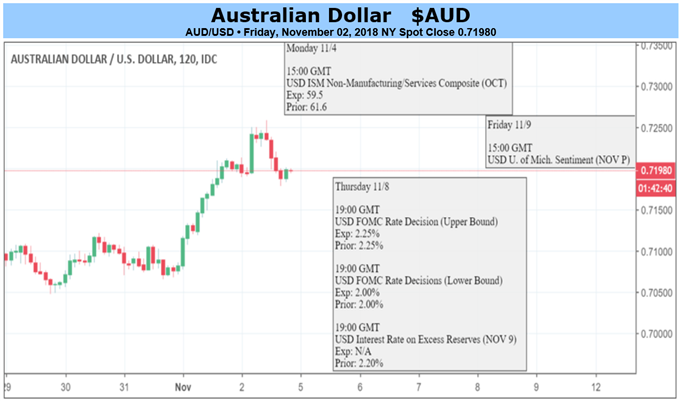 The Australian Dollar heads into a new week in perhaps one of the strangest positions besetting any widely-traded currency.

Its low point for the year against the US Dollar remains uncomfortably close for the bulls. All the same, AUD/USD last week breached the downtrend that had dominated for nearly all of 2018, thanks to strong domestic trade data and some broader weakness in the greenback.

So where next? Well, the Reserve Bank of Australia will give its November monetary policy dispensation on Tuesday, in the biggest local economic event of the week. The RBA does not often provide much succor for its currency these days, and that’s unlikely to change on Tuesday.

Indeed rate futures markets still don’t price in any chance of a change to the record low 1.50% Official Cash Rate either this year or through all of next.

Moreover, with the most recent official inflation data showing last week a deceleration back below the RBA’s target band, there seems little chance of anything but another very dovish accompanying statement from Governor Philip Lowe. Not much chance of support for the Aussie here then.

Still as my colleague and Daily FX Chief Currency Strategist John Kicklighter noted last week, the Australian Dollar has actually proven quite resilient to the bad news thrown at it in October. There was plenty of that too, from the general bout of risk aversion hitting both stock markets and growth-sensitive currencies like the Aussie, through to more specific, domestic problems.

These included that feeble inflation data and some added political risk when the ruling Liberal Party lost a key parliamentary seat. This in turn perhaps suggested that new Prime Minister Scott Morrison’s time is already running out and that the country could have its seventh political leader in eleven years when a general election are held in 2019. That is quite a lot of churn at the top for a developed democracy, and adds to investor uncertainty.

And yet AUD/USD has been reasonably steady since October 4, declining to lurch lower as it surely would have previously, and indeed has more often than not throughout this year. Indeed the end of last week saw that turn higher.

One reason for this is that, despite some gloomy fundamentals, the market is already very short of the currency. The last Commitment OF Traders report from the US Commodity Futures Trading Commission showed net-short Australian Dollar positions at their highest level for three years.

That is quite something for the currency of a country whose economy is growing quite strongly and whose employment creation record is strong. Of course, the interest rate gap continues to yawn in the US Dollar’s favor and it is hard to see AUD/USD staging a meaningful fightback for as long as it does.

Still, the market is very short, even after almost a year of solid falls, and it may see little reason to push the Aussie much lower now. There may even be a little fightback if risk appetite can hold up but, as that is a very hard call to make, it’s a neutral call from me.