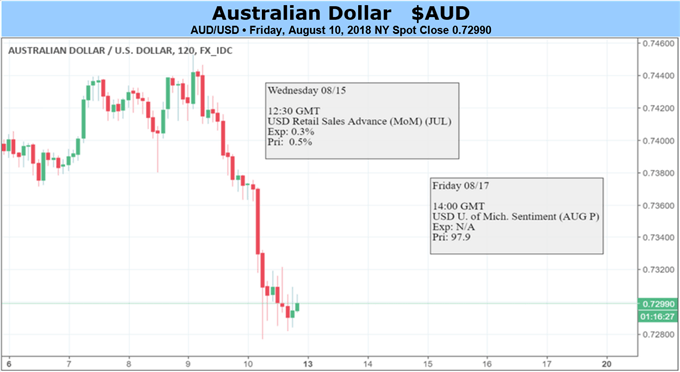 The Australian Dollar has been stuck in a broad trading band since the middle of June and the coming week is unlikely to see it break.

To be sure, we will get plenty of juicy little economic snippets out of the Australia in the next seven days. Business and consumer confidence numbers are due, along with key official unemployment data. They are expected to show continued strong job creation, probably only adding to the conundrum of persistently weak inflation.

However the numbers go, though, the problem for Aussie bulls will remain what it has been all year. None of them will move the dial on Australian interest rate expectations, which remain moribund. Rate futures markets do not fully price-in even a quarter-point increase in the record-low 1.50% Official Cash Rate for all of next year.

Last week’s Reserve Bank of Australia decision to hold once again means that that particular rate is now heading unchanged into its third year – something unprecedented in Australian financial history. The painful comparison with a US in which rates have risen quite sharply- and will continue to do- so remains stark.

Then there’s trade. There’s always trade these days, isn’t there? Australian Dollar investors are casting nervous eyes at relations between Washington and Beijng, as well they might. Australia has a vast trading relationship with the latter and a crucial geostrategic partnership with the former. It has almost as much interest in a resolution as do the main players themselves. And resolution will be a long time coming.

Looming over all this is the suspicion that the RBA has no real problem with a weaker Aussie, given its regular pronouncements to the effect that too much currency strength hurts its ability to hit its goals.

Overall, AUD/USD probably remains biased downwards once this persistent range breaks. However as this week looks unlikely to be the week when it does, it’s got to be a neutral call.