Australian Dollar’s Fall Could Resume If US Numbers Hold Up 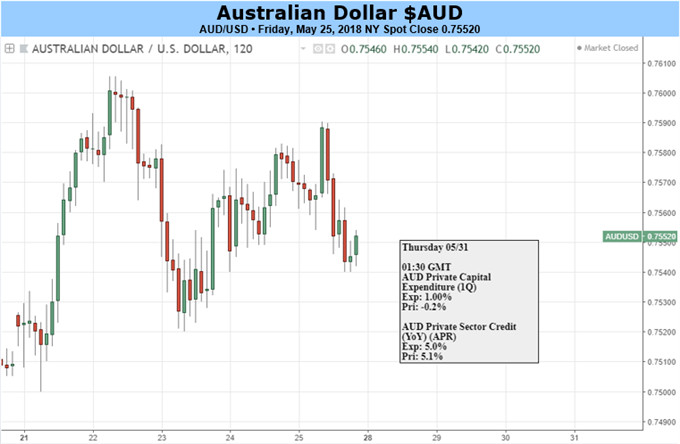 The Australian Dollar has settled into a tentative range, which has slowed the process of deepening AUD/USD weakness, previously in place since January.

You can see the range in the chart above. It’s the block in red. That now clearly cuts across the blue downtrend channel, which formerly governed proceedings and which was in itself an acceleration of 2018’s long slide from January’s highs.

The last couple of months’ trend toward broad US Dollar strength saw a little differentiation last week. The Euro and Sterling remained under fundamental pressure thanks to Brexit, increasing euroskepticism in Italian politics and softer economic data overall.

However, the Australian and New Zealand Dollars managed a little more strength, on higher commodity prices and an admittedly patchy revival in risk appetite. This strength has come despite ongoing weakness in some Australian economic indicators.

Assuredly, it is hard to see the AUD/USD downtrend as over, or anything like it. Monetary policy differentials still markedly favor the greenback. The US Federal Reserve is hotly tipped to raise interest rates yet again next month. By contrast, the Reserve Bank of Australia is expected to keep its own key Official Cash Rate on hold at the current 1.50% record low until August 2019, according to futures market pricing.

The coming week offers investors plentiful insight into US economic doings. Consumer confidence, GDP and personal spending data will all be released, as will May’s crucial employment figures.

We’ll get a lot less out of Australia, which will leave the US Dollar to drive AUD/USD. If the US numbers keep market focus on the probability of more Fed rate hikes this year, it’s likely that the greenback’s uptrend will resume against the Aussie, if only for lack of counter arguments from the latter’s home country.