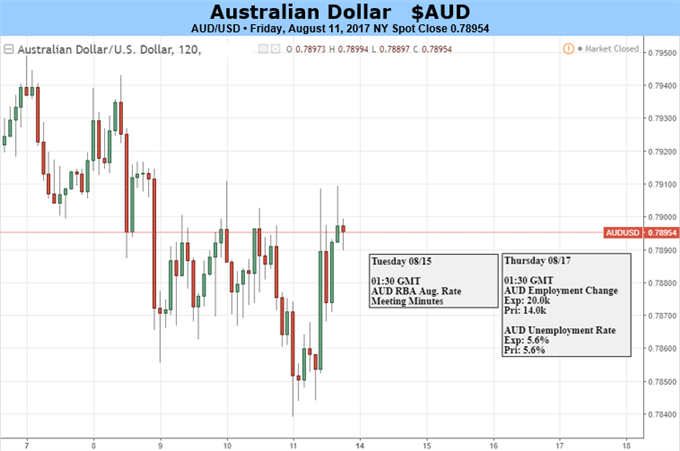 The DailyFX Trading Guide can help you with your Australian Dollar strategy.

The coming week is light in terms of Australian economic numbers.

The sole obvious likely market mover is official employment release which will come on Wednesday. Even that is likely to have a binary and probably transitory impact on the currency; good numbers will mean Aussie gains, poor ones will see it slip.

Next week therefore is more likely to be about the background than the economic foreground as far as the Australian Dollar goes. That means investors will have one eye on global risk aversion and another on the Reserve Bank of Australia.

That central bank was last week at pains once more to point out the benefits of a lower currency. Governor Philip Lowe said again that a weaker Aussie would be helpful in getting the economy back to full employment. One of his deputies, Christopher Kent, said that a further Aussie rise would mean lower domestic growth. This was a subtle shift. The central bank has long argued that currency strength would complicate Australia’s transition away from reliance on raw material exports. But to link a stronger currency with weaker growth is perhaps a more explicit warning to traders that little more altitude is tolerable.

Mr. Lowe actually mentioned “intervention” in the currency markets last week. Admittedly he only did so in the context of denying that current market conditions were extreme enough to warrant it, but nonetheless he said the word. Markets will take note.

Of course the RBA’s problem is that yield-starved investors still find the Aussie attractive even now, close to two-year peaks against the US Dollar.

While the warlike rhetoric between Washington DC and Pyongyang remains at full volume, diminished risk appetite will probably weigh on the growth-linked Aussie and send investors scuttling instead for the supposed haven charms of the Japanese Yen and Swiss Franc. But should that risk appetite rise, the Aussie will no doubt find willing buyers, even with the central bank glowering over the heights. This is if you will a sort of deadlock which is why the call for this week is a (hopefully) honourable neutral one. 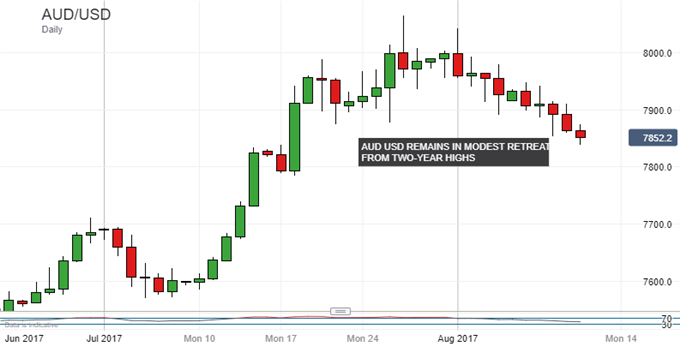