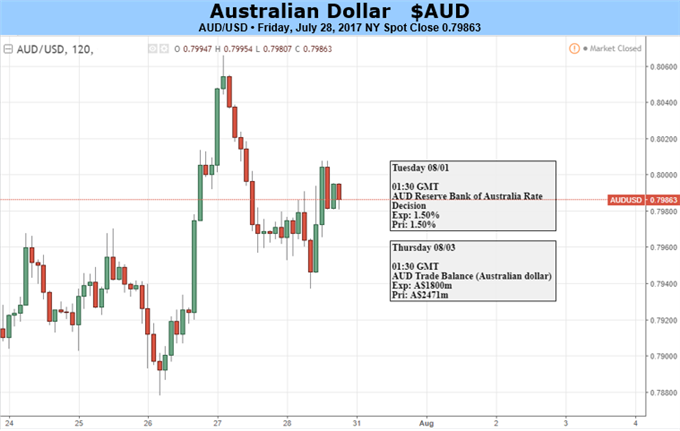 AUD/USD stands at risk for a near-term pullback as it initiates a bearish sequence, but the Reserve Bank of Australia’s (RBA) August 1 interest rate decision may trigger fresh yearly highs in the exchange rate should Governor Philip Lowe & Co. alter the course for monetary policy.

Even though the RBA is widely expected to keep the official cash rate at the record-low of 1.50%, the accompanying statement may boost the appeal of the Australian dollar if the central bank shows a greater willingness to move away from its easing-cycle. The RBA may highlight a hawkish outlook as the ‘Australian economy is expected to strengthen gradually, with the transition to lower levels of mining investment following the mining investment boom almost complete,’ and Governor Lowe and Co. may start to prepare Australian households and businesses for higher borrowing-costsas ‘the data available for the June quarter had generally been positive.’

In contrast, mixed data prints coming out of the U.S. economy may continue to drag on the dollar as it tames expectations for three Fed rate-hikes in 2017. Even though the U.S. Non-Farm Payrolls (NFP) report is expected to show the economy adding another 180K jobs in July, a downtick in Average Hourly Earnings may encourage the Federal Open Market Committee (FOMC) to retain the current stance throughout the remainder of the year as inflation continues to run below the 2% target. In turn, the bullish AUD/USD behavior may persist over the days ahead as Fed Fund Futures still highlight a 50% probability for a move in December. 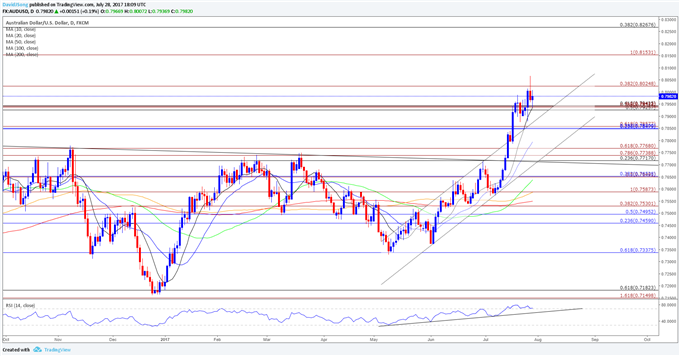 AUD/USD may face a near-term pullback as it starts to carve a series of lower highs & lows following the failed attempt to close above the 0.8020 (38.2% expansion) hurdle. However, the key developments on tap for the week ahead may fuel the change in AUD/USD behavior as the pair breaks out of the bearish trend from 2016. Keep in mind the Relative Strength Index (RSI) is sitting in oversold territory for the first time since 2014, with the oscillator highlighting the risk for a further advance in aussie-dollar as long as it holds above 70. Need the RSI to flash a textbook sell-signal and threaten the bullish formation from May to raise the risk for a near-term correction in the exchange rate. 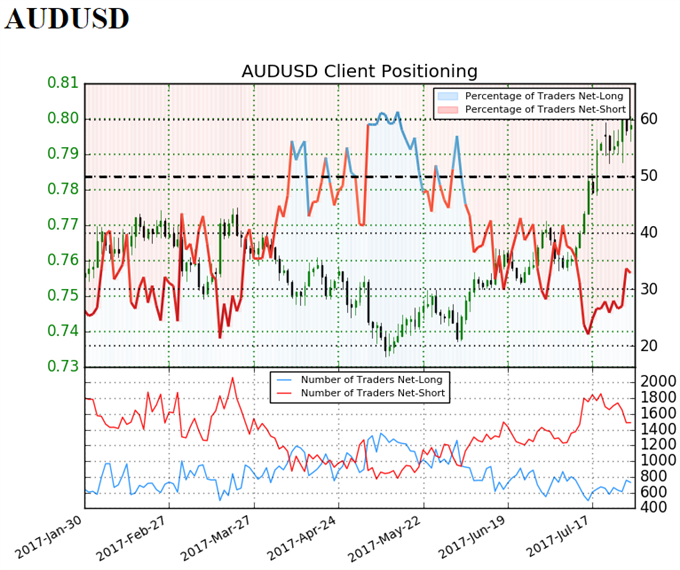