Australian Dollar Bulls’ Hawkish RBA Bet May Not Pay Out 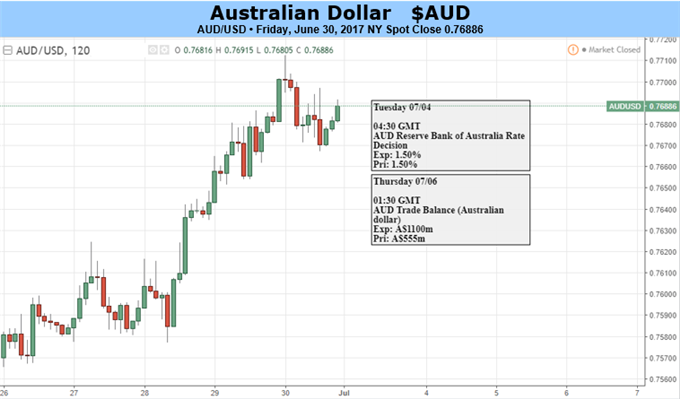 Get live coverage of all major Australian economic data at the DailyFX webinars.

Last week saw the Australian Dollar gain on its big, US brother after a chorus of more hawkish developed-market central bank governors put the greenback under pressure against their currencies.

Mario Draghi of the European Central Bank, the Bank of Canada’s Stephen Poloz and even the Brexit-tossed Bank of England’s Mark Carney all sang variations on the same theme. And that theme was that ultra-accommodative monetary policy’s sell-by date is very nearly here.

For the Aussie market then, there’s only one question in hand as a new week starts. Will the Reserve Bank of Australia swell this chorus?

The RBA will give us its July monetary policy decision on Tuesday, when the Official Cash Rate is firmly expected to remain at its 1.50% record low. Assuming it does, all will hinge on what the RBA says to the market in the aftermath.

AUD/USD has reportedly risen in the last few days precisely on the expectation that RBA Governor Philip Lowe will indeed join his international colleagues and warn that ultra-low rates’ best days are behind them.

But are the markets getting ahead of themselves here? It may yet be too early for a credible shift in the neutral tone that the RBA struck in June. It’s surely arguable that not enough has changed on the inflation or likely-growth fronts since to warrant any change.

Moreover, bets on any actual rate increases from the RBA remain long shots. According to index provider ASX, futures markets do not yet fully price a rise at any meeting between now and November 2018. That said, the yield curve now implied by 30-day cash-rate futures suggests somewhat higher rates than it did at the start of last week; just not a full, quarter percentage point rise.

Clearly if there is any shift in RBA rhetoric then it will have to be in the hawkish direction and, if it is, then the Aussie can expect the sort of support which the Euro, British Pound and Canadian Dollar enjoyed last week.

However, on the basis that it’s too soon to expect a definitive tonal shift, those buying AUD/USD in expectation of one could be disappointed. It’s a bearish call for AUD/USD this week. But only just, yet again 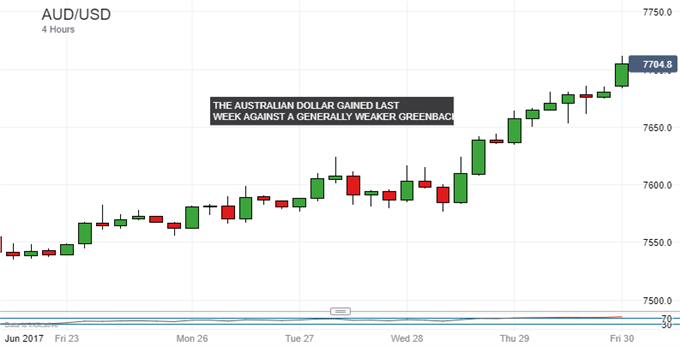