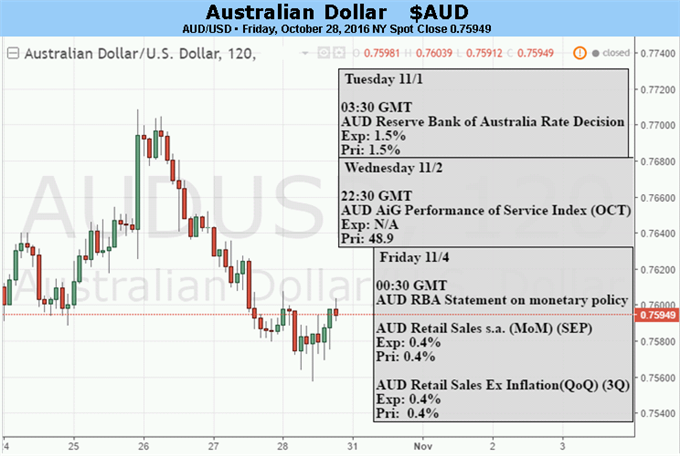 See what short-term AUD/USD patterns hint about on-coming trends with the GSI indicator!

Concrete trend development proved elusive for the Australian Dollar yet again last week. The currency was mired in a now-familiar range below 0.78 against its US counterpart despite an ample supply of would-be breakout catalysts including domestic CPI and US GDP data. An upgrade in the potential potency of event risk in the week ahead may finally shake prices loose of their confines.

The RBA monetary policy announcement is in the spotlighton the domestic front. The central bank is widely expected to keep the benchmark cash rate unchanged at 1.5 percent, with the priced-in probability of a decrease at just 5 percent. This puts the onus on any forward guidance to be offered in the policy statement released following the sit-down.

Investors are positioned for standstill over the coming 12 months and this seems unlikely to change. Australian economic news-flow has been relatively stable in recent months, suggesting the RBA is unlikely to feel pressured to expand stimulus or begin laying the groundwork for a tightening cycle. With that in mind, the rate decision may translate into a non-event.

The risk of externally-inspired volatility is acute however. The FOMC monetary policy announcement takes top billing, with traders keen to see if Chair Yellen and company will demonstrably signal that a rate hike is on tap in December. The publication of October’s US Employment report will fan the flames of speculation further.

The markets see the probability of a December rate hike at 69 percent. A hawkish policy statement matching the tone of recent Fed rhetoric coupled with steady dissent from pro-hike officials and a decent payrolls print (keeping the trend average stable near 200k) may boost conviction. This might undermine the Aussie’s yield appeal and hurt risk appetite, which could bode doubly ill for the sentiment-sensitive currency.