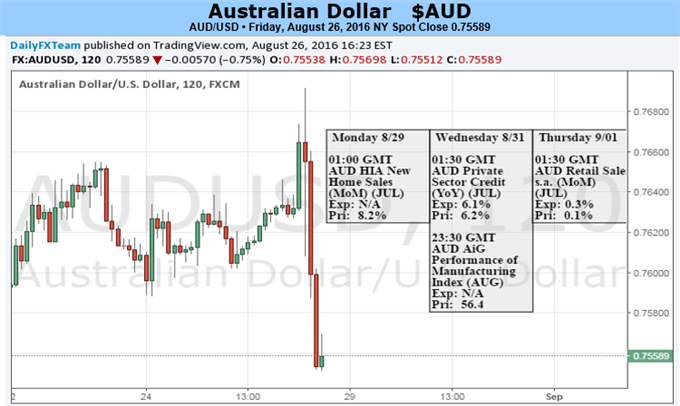 What do retail investors’ AUD/USD trade decisions say about the price trend? Find out here.

The Australian Dollar continued to trade lower last week as hawkish commentary from Federal Reserve Chair Janet Yellen fueled near-term rate hike speculation, weighing on the yield-sensitive currency (as expected). The central bank chief said “the case for an increase in the federal funds rate has strengthened in recent months”, pushing the priced-in likelihood of tightening by year-end to nearly 65 percent and sending the Aussie to a monthly low against its US counterpart.

Looking ahead, Yellen’s confidence will be tested as Augusts’ US Employment figures cross the wires. An increase of 180k in nonfarm payrolls is expected, which would fall closely in line with the average pace of 190k that the Fed Chair approvingly cited in her speech. That suggests a print in line with expectations will probably prove relatively innocuous despite marking a slowdown from the prior month but also do little to further the rate hike narrative. Employment figures have veered north of consensus forecasts in recent months however. More of the same this time around may give rate hike bets a further boost, pressuring the Aussie lower.

On the domestic front, a steady stream of activity data will feed speculation about the RBA’s policy trajectory. Building Permits, Retail Sales and capex numbers are all due to cross the wires. Australian economic news-flow has weakened relative to economists’ expectations over recent weeks and the year-end monetary policy outlook implied in futures prices has steadily eroded despite central bank officials’ downplaying of near-term stimulus expansion prospects. Another soft round of data outcomes may encourage the markets’ dovish disposition, compounding downward-pulling external forces and deepening the selloff.