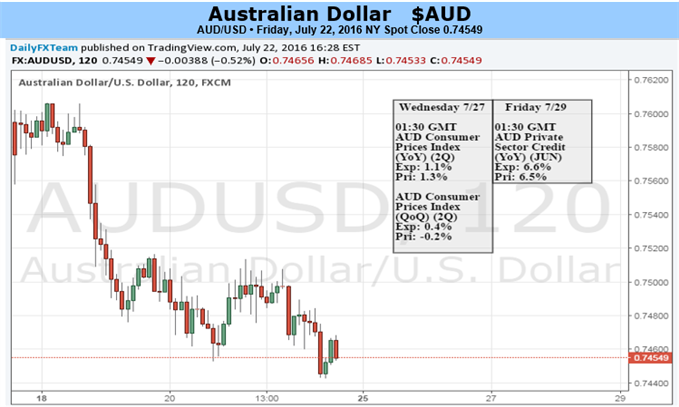 • AUD/USD Quietly Coils Together Two Bearish Patterns in a Row

• If you’re looking for trading ideas, the DailyFX Q3 Forecasts were recently released. Please click here to get the full guide.

The Australian Dollar has put in a sizeable reversal of the prior bullish trend this week, falling by as much as 234 pips or 3% against the US Dollar from last Friday’s high. There was one primary motivator throughout this week driving price action in AUD, and that was the release of the meeting minutes from last month’s RBA rate decision which indicated that the bank was in a ‘wait-and-see-approach’ regarding future rate policy. This seemingly opens the door to future rate cuts in the effort of stoking growth and inflationary pressure.

The RBA did reiterate their data dependency pertaining to future rate moves at that most recent meeting; saying that further data on inflation and jobs would become available in the coming months and that the bank would update forecasts ahead of their August meeting. And despite these pledges to look towards future data prints for rate cues, the bank also noted that inflation remains a concern as it remains well-below targets; and this deductively highlights the importance of next week’s Australian Q2 CPI print for gauging probabilities of a cut in the coming months.

The brutal reaction in the Australian Dollar after the release of these meeting minutes highlights the growing expectation for a cut at the bank’s next meeting in August. As inflation in Australia has continued to lag, the RBA’s apparent reticence to cut rates had kept AUD/USD rather strong. Now with this new information that the bank may be open to cuts should data continue highlighting weakness, expect more emphasis to be placed on individual data points out of Australia. Next week brings us but two relevant data points on the calendar with Wednesday’s CPI release being the highlight (Tuesday night in the U.S.). In the first quarter inflation had contracted from the prior quarter, with a CPI read of 108.2 from the prior quarter’s read of 108.4.

Should CPI contract yet again, expect the Australian Dollar to trade lower under the anticipation of a cut coming in August: And even if that inflation print comes-in in-line with last quarter’s read, markets will likely continue to expect dovishness out of the RBA until some element of strength is seen in the Australian economy. Should CPI show above the prior high set in Q4 2015 of 108.4, we’ll likely see rate-cut bets price-out of the market with an extremely strong Aussie; but this appears to be a distant possibility from where we sit now given the global drag on growth that’s been seen in most developed economies of recent.

The forecast on the Australian Dollar will be set to bearish for the week ahead.