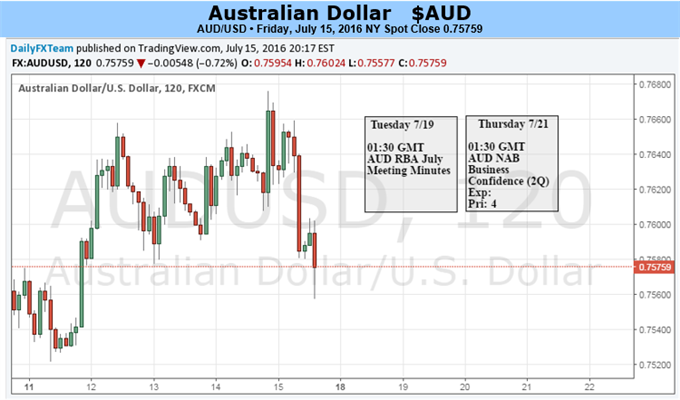 A lull in top-tier domestic event risk puts the Australian Dollar at the mercy of risk sentiment trends once again. The currency remains highly sensitive to changes in market mood, with the correlation between AUD/USD and the benchmark S&P 500 stock index at a three-month high of 0.9 (on rolling 20-day studies).

The aftermath of the UK Brexit referendum remains a critical macro theme. With the threat of a financial crisis immediately following the vote seemingly out of the way, investors have turned their attention to gauging the severity of knock-on effects on global economic growth and financial stability.

Needless to say, the Eurozone is ground zero for spillover. Germany’s ZEW survey of investor confidence, the flash Eurozone PMI roundup from Markit Economics and the ECB monetary policy announcement will offer early clues about the severity of contagion being expected in official and private-sector circles.

Uncertainty about the ground rules of the future economic relationship with the UK – heretofore the second-largest EU member state – will almost certainly dampen activity on the Continent. PMI and ZEW data will hint at the severity of the cooling effect while the ECB will suggest what may be done about it.

Eurozone economic news-flow has somewhat softened relative to consensus forecasts recently, warning that signs of weakness may already be emerging (although it is premature to say this with confidence for now). If this paves the way for downside surprises, risk appetite may be undermined.

For its part, the ECB seems unlikely to deliver an outright expansion of stimulus measures but comments from central bank President Mario Draghi will be critical to gauge policymakers’ readiness to act if need be. A neutral wait-and-see posture may prove to be a disappointment, amplifying the threat of risk aversion.

On the geopolitical front, an attempted military coup in Turkey late Friday complicates the landscape further. The country’s proximity to and significant economic linkages with Western Europe may fuel fears that turmoil there will amplify existing post-Brexit vulnerabilities, catalyzing a broader unraveling.

Taken together, all this amounts to a precarious environment for the Aussie. Much of the landscape remains clouded however and a great deal can change quickly, triggering seesaw volatility. With that in mind, the probability of follow-through on seemingly decisive moves should not be taken for granted.