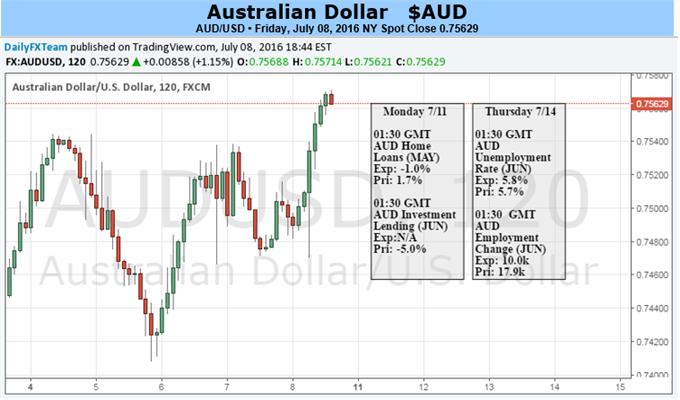 Losing money trading the Australian Dollar? This may be why.

The Australian Dollar advanced for a sixth consecutive week, making for the longest winning streak in a year. The currency’s resilience began as a reflection of ebbing RBA rate cut bets in late May but prices have since mirrored sentiment trends, posting a sharp two-day downswing amid risk aversion following the UK “Brexit” referendum but swiftly recovering alongside stocks as the dust settled.

From here, the central question on the minds of investors is whether global economic growth can hold up following the UK vote. The fear is that an almost certain slowdown in Europe will reverberate on a worldwide scale while pressure on the structural integrity of the Eurozone – the core of the broader EU –threatens market-wide financial stability.

The week ahead offers ample opportunities to evaluate the landscape. Chinese GDP figures as well as US retail sales and consumer confidence reports will help establish where the world’s top-two economies stood ahead of the Brexit vote, offering a sense of whether they will amount to potent countervailing forces to malaise on both sides of the English Channel.

While US fundamental outcomes have markedly improved relative to consensus forecasts over recent weeks, the situation in China has been far less encouraging. The revelation of a steeper slowdown than already projected by economists (6.6 percent year-on-year in the third quarter vs. 6.7 percent in the second) may undermine risk appetite and weigh particularly heavily on the Aussie considering Australia’s intimate trade relationship with the East Asian giant.

Domestic news-flow could limit sentiment-inspired weakness. June’s Employment report is expected to show job creation slowed a bit compared with the prior month but Australian data’s tendency to outperform over the past two months opens the door for an upside surprise. That may weigh against RBA easing expectations, although traders still lean in favor of a cut at the next meeting despite supportive data news-flow.