Crude Oil Price Slips as China PMIs Disappoint Ahead of OPEC+. Where to for WTI?

Crude oil dipped on Monday after Chinese manufacturing PMI data came in at 49.0 instead of 50.3 anticipated and a prior read of 50.2. The WTI futures contract is nearing US$ 97 while the Brent contract is trading around US$ 103bbl.

This is ahead of Wednesday’s OPEC+ meeting where hopes of adding to production might be difficult to achieve. The cartel is undershooting their current target by 2.7 million barrels per day according to the May data provided by the organisation.

APAC equity indices were mostly firmer to start the week after Wall Street finished last week on a positive note. Hang Seng was an underperformer after Alibaba was added to a list of companies that face potential de-listing from US exchanges.

Elsewhere, former US Treasury Secretary Larry Summers ridiculed the prospect that the Fed funds rate of 2.5% is at neutral when inflation is 9.1%. Fed Chair Powell said that the rate was neutral last week.

The perception that Powell pivoted post-FOMC last Wednesday led to an equity rally that also saw corporate bond spreads narrow. This is essentially an easing of monetary conditions, the opposite of what the Fed is trying to achieve at the moment.

The Japanese Yen is the best performing currency so far on Monday and the Kiwi has also seen some gains while other currencies are mostly unchanged.

After a series of European PMIs, in the US ISM manufacturing data will be the focus.

WTI crude oil made a three-week high on Friday, but it has pulled back to familiar levels. That high and a previous peak might offer resistance at 101.88 and 100.99 respectively.

The price has not closed above the 21-day simple moving average (SMA) since mid-June and a close above it might indicate a resumption of bullish momentum. 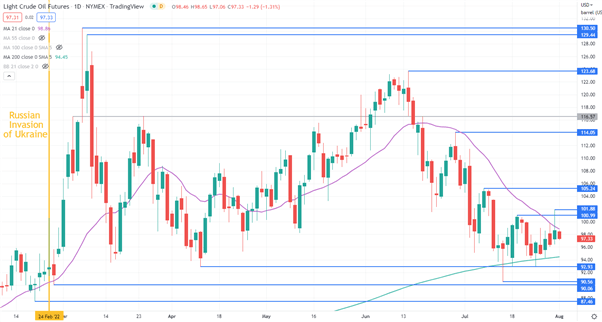