Crude Oil Jumps Up as US Dollar Weakens and Powell Alters Course. Can Oil Go Higher?

Crude oil made fresh 7-year highs today with Brent crude trading above US$ 86 a barrel and WTI crude above US$ 84.5 a barrel. As a result, the Norwegian Krone was the outperforming currency today, while the US Dollar languished. Natural gas prices rose sharply while China coal markets eased off.

Saudi Arabian Energy Minister, Prince Abdulaziz bin Salman, said that oil producers should not be complacent with current prices as the pandemic could still cause demand disruptions. This was interpreted by the market to mean that OPEC+ will stick to cautiously adding supply after drastic cuts were made in 2020.

Covid cases in China are on the rise and concerns are emerging for their growth outlook. Goldman Sachs today downgraded their forecast for Chinese growth to 5.2% from 5.6% previously for 2022.

The PBOC added more liquidity than expected at Yuan 200 billion. HSBC announced a US$ 2 billion share buy back after earnings beat estimates. APAC equities were little changed and mixed with Japan’s Nikkei 225 down the most.

Federal Reserve Chairman Jerome Powell appeared to be changing tact on the inflation outlook on Friday. Before he spoke, the US 5-year break-evens saw inflation being above 3%, the upper band of the Feds’ target. Some commentators believe this to be a significant level for the Fed.

Powell was attending a virtual seminar organised by the Bank for International Settlements and the South African Reserve Bank. He acknowledged that supply constraints and elevated inflation are likely to last longer than previously expected. The 5-year break-evens moved back toward 2.9% on the comments.

Treasury Secretary Janet Yellen also weighed in and said that she expected prices to remain elevated through the first half of 2022 but that they should ease in the second half of the year.

Important data is coming later in the week, with US GDP and jobless claims numbers due on Thursday and the Fed’s favoured PCE inflation gauge due up on Friday.

If this arrangement holds, bullish momentum might continue to evolve A move below these SMAs could signal a pause in bullishness. 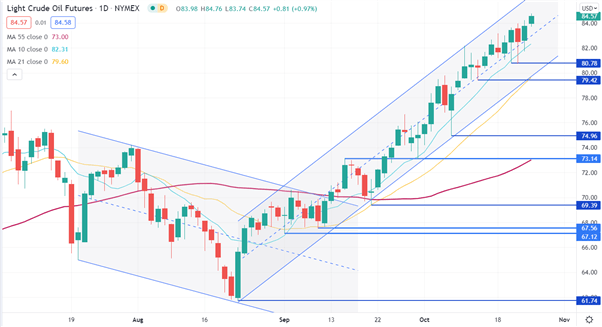