The Japanese Yen and Swiss Franc were the underperformers today as risk appetite remained healthy after more positive earnings results from the US. APAC equities were all in the green. Government yields in Asia took US Treasury notes’ lead and went higher. Australian 10-year government bonds yields rose 7.7 basis points.

The Yen is under considerable pressure from rising global yields and as Japan is a large energy importer, the current environment of astronomically high energy prices is weighing the currency down. Today it made a 4-year low.

The issues within the energy commodity complex are plaguing economic recoveries. Chinese coal futures backed away from record highs as China’s National Development and Reform Commission (NDRC) today announced measures to increase output. Among the measures was the prioritising of coal transport through ports and rail infrastructure.

As energy prices continue to remain at elevated levels, industrial metals are also bid, due to industrial production capabilities being a lower priority than heating homes. Energy is being rationed amid blackouts in many parts of the world. While copper has settled down after a rally to start the week on low inventories, aluminium and zinc have moved higher in recent sessions.

Soft commodities have seen some of this supply squeeze action, particularly coffee, but there are growing concerns other food costs could soar as transport becomes further back logged and expensive.

All this leads to ever growing inflation concerns and rising yields. If some of the worst-case scenarios play out, central bank action may not be as effective as it once was.

Looking ahead, there are a number of ECB speakers, Canadian CPI and US MBA mortgage applications data is due.

It’s not surprising that in a sharp move up like this, the Relative Strength Index (RSI) is in over-bought territory. However, it has been for over a week.

Looking at the 21-day simple moving average (SMA) based Bollinger Band swe can see the width of the bands has expanded significantly as volatility has increased.

The price moved outside the upper band last week and then moved back inside the band. This can be interpreted as a bearish signal. However, USD/JPY moved higher and sits within the bands despite making new highs. For now, it appears the Bollinger Bands are not indicating an overly stretched price. 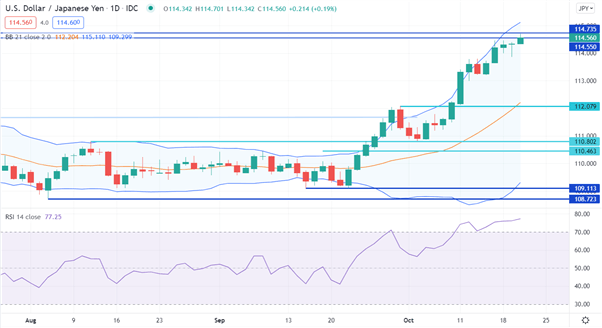