Crude oil, and the markets in general, breathed a sigh of relief as Evergrande announced it had struck a deal to pay bond holders on Thursday. The filing was not specific on the details of the deal struck and the market perception is that the coupon payment was not paid in full but that a default had been avoided.

Asian equity markets are ending the day with some red and green on the screens, but they are all higher from where they started before the news out of China.

The PBOC also added liquidity via their reverse repurchase agreements program. The sense

from markets today is that systemic risk appears to have been avoided and the Chinese government could manage the Evergrande situation to avoid contagion.

The commodity currencies of AUD, NZD and CAD all moved higher with NOK the best of the basket, aided by crude oil and energy trading higher. Copper enjoyed a strong bounce back from US session lows and iron ore managed to steady itself for a second day.

The Bank of Japan interest rate decision delivered on expectations of no change. The Yen continued the weakening that already begun with safe-haven currencies abandoned in the risk-on environment. Combined with commodity appreciation, this led to AUD/JPY and NZD/JPY outperforming.

The FOMC meeting is the key event today. The extent of policymakers’ plans to taper stimulus will be the focus for markets, as well as any changes in the “dot plot” – a summary of Fed officials’ forecasts for the direction of the bank’s target interest rate – that hint at the potential for movement in 2022. At the last meeting, 7 of 18 FOMC members projected a 2022 rate hike.

Crude oil futures broke up through trend line resistance last week. The 21-day simple moving average (SMA) has also just crossed up through the 200-day SMA to form a Golden Cross, which is a potential bullish signal. 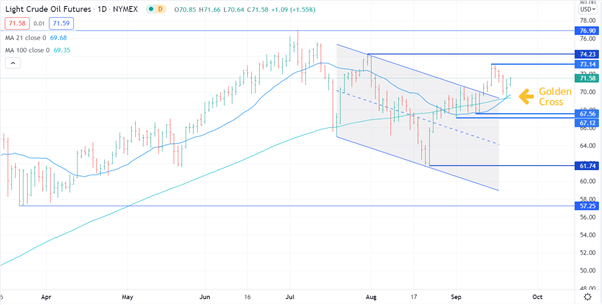