US Non-Farm Payrolls data disappointed markets late Friday and the US Dollar was promptly sold off going into the weekend, but has managed a small recovery in Asia today. The US jobs number came in at 235,000 rather than the forecast 733,000 while the unemployment rate was in line with expectations at 5.2%. This has the market re-adjusting the Fed winding back of asset purchasers and seeing the taper timeline delayed, not cancelled.

A coup in Guinea has sent aluminium prices soaring. Guinea has the largest known deposits of bauxite ore, the base ingredient for making aluminium. In the last few years, the West African nation has been investing heavily in infrastructure to increase supply. A coup over the weekend by the Guinean head of special forces, Colonel Mamady Doumbouya, has raised concerns about the global supply capacity of bauxite being restricted.

Crude oil went lower on news that Saudi Arabia cut prices to all of its Asian customers, as there has been less demand resulting from further lockdowns due to Delta. Prices for North West European and United States customers remained unchanged. This comes on the back of OPEC+ announcing last week that production would be increased by 400,000 per day.

The Japanese Nikkei 225 and Topix stock indices maintained fresh highs today with optimism that a new Prime Minister will bring in further stimulus measures. Hong Kong’s Hang Seng Index and mainland China’s CSI 300 equities benchmark also had a positive start to the week after Vice Premier Lui He provided re-assurances that the government was still supportive of the development of the private economy. Recent corporate crackdowns in China have caused some cautiousness from investors.

With the States out, the next data to watch is the Chinese trade report and the RBA monetary policy meeting tomorrow.

Crude oil has failed to break above the down trend trading window. The price currently sits above the 21-day simple moving average (SMA) providing some positive influence but a close below the 100-day SMA may suggest that momentum is fading and the price might remain inside the range for longer.

Should a break to the topside occur, there is likely to be further resistance at the previous highs of USD 74.23 and 76.90. On the downside, support levels to watch are the previous lows at 61.74 and 57.25 as well as the lower trend line. 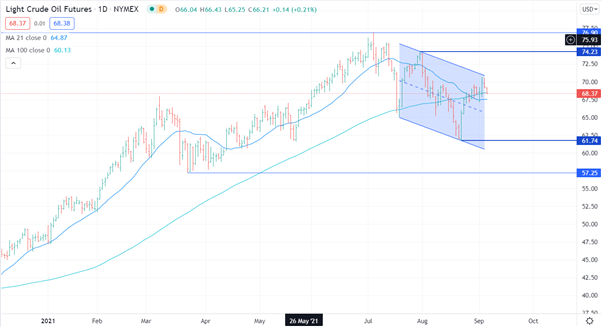