Euro May Fall vs. US Dollar as FOMC Minutes Drive Fed Outlook

The anti-risk US Dollar and Japanese Yen surged against their major counterparts yesterday while stocks and Treasury yields declined. The move appeared linked to downward revisions on June US Markit PMI data as well as a disappointing ISM service-sector survey.

The results suggested that the pace of economic activity in the most dominant part of the world’s largest economy slowed more than economists projected last month. The internals of the ISM report echoed a worrying trend seen elsewhere: weaker growth and buoyant prices.

This presents an understandable challenge for Fed officials, who are charged with delivering on a dual mandate of price stability and maximum employment. Until recently, the central bank erred on the expansionary side, allowing price growth to run hot as the economy regains ground lost amid the Covid-19 pandemic.

That calculus may be changing. While the ISM report is the latest in a string of indicators suggesting growth is moderating after the surge from crisis lows, it remains elevated. Yesterday’s services ISM reading was 60.1, well north of the trend average of 55.6. It was only “disappointing” relative to baseline forecasts.

Meanwhile, the ISM price growth index registered at 79.5, a hair lower than the 16-year high of 80.6 recorded in May. The trend average is a far more modest 57.9. With a tilt toward fiscal largesse still seemingly in place to underpin growth, the Fed may start to view runaway inflation as a greater priority.

The extent to which this may be underway could be illuminated with the upcoming release of minutes from June’s momentous FOMC meeting. It brought a hawkish pivot from officials. They recognized that price growth had surpassed expectations and introduced previously absent rate hikes into the 3-year outlook.

Since then, a steady stream of comments from US central bankers has shown that some favor raising rates as soon as next year. Traders have taken notice: Fed Funds futures now reflect at least one hike in 2022 and two more increases in 2023. A full 100bps in tightening is seen through the end of 2025.

While that is hardly “hawkish” in absolute terms, it is a meaningful relative shift for a central bank that appeared to have no shortage of excuses for delaying stimulus withdrawal. Confirmation in kind in the Minutes document may spook markets worried about tightening just as growth normalizes downward.

US Dollar seems likely to rise if that is indeed the takeaway, driven upward by a supportive shift in comparative yield prospects as well as haven demand. The Yen may continue to gain as well, with risk-off flows compounded by a favorable real-rates backdrop.

This backdrop may help realize bearish EUR/USD technical cues. The Euro may resume the downward trajectory launched in late May against the US Dollar (as expected) after prices issued a daily close below support at 1.1836, with an eye on the 2021 swing bottom at 1.1704.

Positive RSI divergence undercuts the case for downside follow-through, suggesting that bearish momentum have ebbed. This may speak to admittedly slower progress downward compared with the mid-June plunge, but that does not necessarily mean that a bullish reversal is around the corner.

Reversing back above 1.1860 – the June 18 close – seems like a pre-requisite for neutralizing immediate selling pressure. The next layer of substantive resistance lines up in the 1.1952-90 zone. Any upswing that falls short of overcoming that barrier seems likely to be corrective. 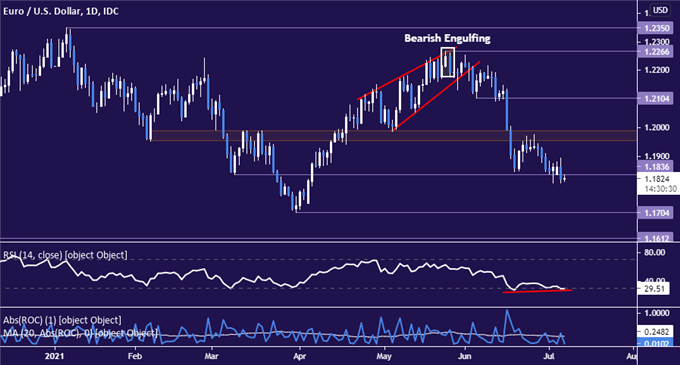