Equity markets extended their recent rally during Asia-Pacific trade, as investors cheered the prospect of additional fiscal stimulus out of the US and a string of positive earnings reports. Australia’s ASX 200 rose 0.92% while Japan’s Nikkei 225 pushed 1% higher. China’s CSI 300 index slipped 0.3%, as the nation’s Caixin Services PMI dropped to a nine-month low.

In FX markets, the risk-sensitive AUD, NZD and NOK largely outperformed, while the haven-associated JPY and CHF lost ground against their major counterparts. Gold and silver crept marginally higher despite yields on US 10-year Treasuries moving back above 1.10%. Looking ahead, Euro-area inflation figures for January headline the economic docket alongside a slew of ISM non-manufacturing releases out of the US. 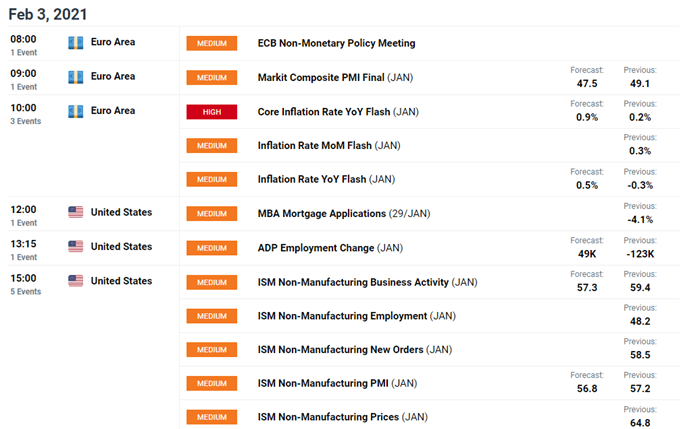 The divergence in rhetoric between the European Central Bank and the Federal Reserve may weigh on the EUR/USD exchange rate in the near term, with several ECB Governing Council members flagging the possibility of cutting interest rates further into negative territory.

Klaas Knot stated recently that “there is still room to cut rates, but of course that would also have to be seen in conjunction to our overall monetary stance”, while his colleague Ollie Rehn reiterated the central bank’s commitment to “use and adjust all our instruments as appropriate”.

To contrast, multiple Federal Reserve members have hinted that the central bank may taper its Quantitative Easing (QE) program later this year, with Dallas Fed President Robert Kaplan expecting “very enthusiastic debates” amongst his peers on the topic.

However, Chairman Jerome Powell made clear that the Federal Open Market Committee would take some time before altering its asset purchasing scheme, stating that “the whole focus on exit is premature”. Nevertheless, it seems apparent that the Fed is done loosening its monetary policy settings at least for the time being.

Therefore, with the ECB continuing to assess whether it will adjust its monetary policy levers further in an attempt to stoke the region’s inflation outlook, investors may continue to put a premium on the Greenback over the Euro in the near term.

Upcoming inflation data out of the Euro-area will be keenly eyed to determine the ECB’s next steps. Disappointing growth in consumer prices probably encourages the central bank to act sooner rather than later and may intensify downward pressure on the Euro in the coming weeks.

From a technical perspective, the US Dollar Index (DXY) – which is heavily weighted towards the Euro – appears poised to extend its recent climb from the January low (89.21), as prices breach Ascending Channel resistance and break above the neckline of an inverse Head and Shoulders reversal pattern.

With the RSI tracking firmly above its neutral midpoint, and the MACD indicator climbing into positive territory for the first time since November, the path of least resistance seems skewed to the topside.

A daily close above the February 2 high (91.29) would probably intensify buying pressure and carve a path for price to challenge range resistance at 91.95 – 92.15. Clearing that opens the door for the index to fulfil the inverse Head and Shoulders’ implied measured move (92.80).

Alternatively, if psychological resistance at 92.00 remains intact, a pullback to the trend-defining 50-day moving average (90.51). 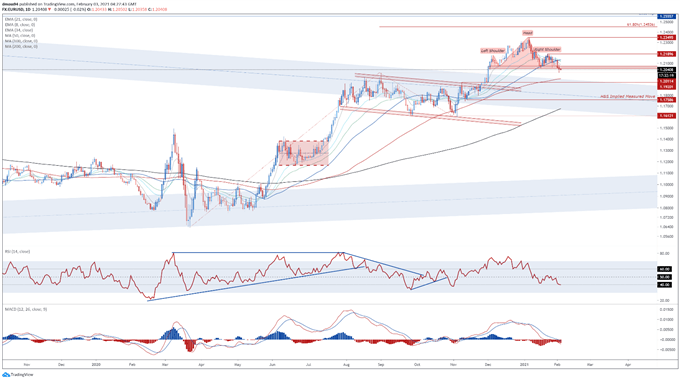 The EUR/USD exchange rate is at risk of extended losses, as price penetrates the neckline of a Head and Shoulders topping pattern and slides to its lowest levels since late November.

The development of the RSI and MACD indicator hints at swelling bearish momentum, with both oscillators tracking firmly below their respective neutral midpoints.

A daily close below the September 2020 high (1.2011) likely propel price back towards former resistance-turned-support at 1.1920. Hurdling that paves the way for the exchange rate to fulfil the Head and Shoulders’ implied measured move (1.1759).