It was a mixed day of trade during the Asia-Pacific session, as traders weighed strong industrial profits data out of China against a backdrop of climbing coronavirus cases throughout Europe and the US.

In FX markets, the cyclically-sensitive AUD, NZD and NOK largely outperformed, alongside the haven-associated Japanese Yen. Copper stormed to its highest levels since 2014, buoyed by strong Chinese data and global growth prospects for 2021. 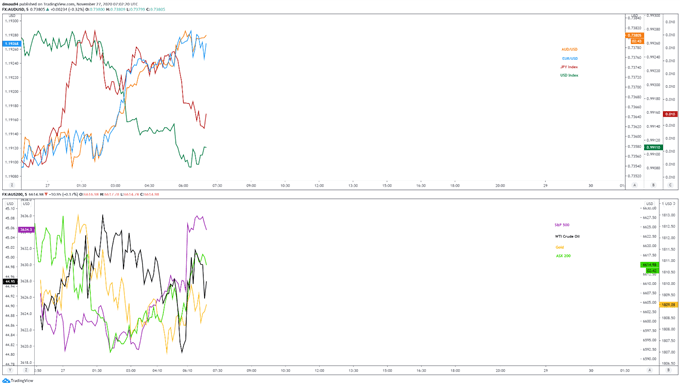 The dovish outlook of the European Central Bank may begin to weigh on the Euro in the coming days, as policymakers flag the provision of further monetary stimulus.

The minutes of the ECB’s November policy meeting stated that “members widely agreed that, given the sharper slowdown in growth momentum and the weakening of underlying inflation dynamics compared with what had previously been expected, as well as the deterioration in the balance of risks, it would be warranted to recalibrate the monetary policy instruments in December”.

This comes as no surprise given the rhetoric from several Governing Council members in recent weeks and the notable tightening of coronavirus restrictions in several European nations. Germany has extended its partial lockdown until just days before Christmas, after total infections of the novel coronavirus surpassed 1 million. 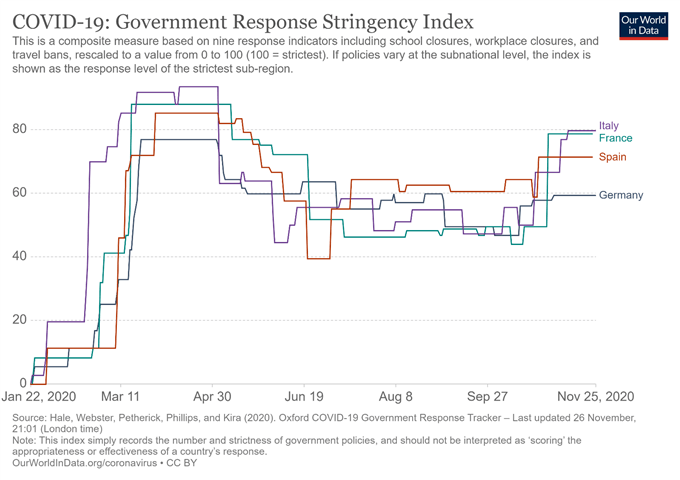 However, restrictions seem to be having a meaningful impact in France, Italy and Spain, with the viral curves of all three nations notably declining. This could buoy regional market sentiment and limit EUR’s potential downside.

That being said, recent fundamental data prints portray a stagnating economic recovery, as the trading bloc records its steepest month of contraction in business activity since May. Composite PMI is expected to fall to 45.1 in November, dragged down by the heavy-hit services sectors.

This deterioration may sway the ECB to look at doing more than just focusing on the PEPP (Pandemic Emergency Purchase Program) and TLTROs (targeted longer-term refinancing operations) as its “main tools for adjusting monetary policy”. 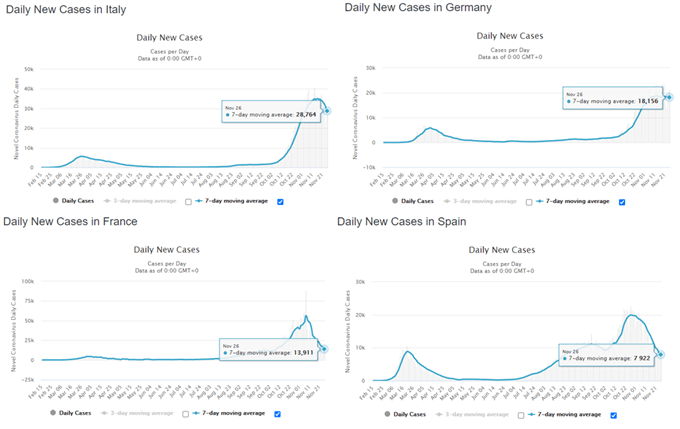 Indeed, there is a miniscule possibility that the central bank may consider lowering interest rates further, after Governing Council Member Klaas Knot said that “we wouldn’t want to exclude any measure going into December”, when questioned on the matter in a recent interview.

The central bank has also noted “that additional asset purchases might not have the same impact on financial conditions and real economic activity as they had earlier in the year”.

Although this is hardly a declaration that rate cuts are on the table, investors should remain fleet-footed ahead of the central bank’s monetary policy meeting on December 10.

With deteriorating fundamentals potentially justifying the implementation of more aggressive easing measures from the ECB and in turn undermining the Euro against its major counterparts. 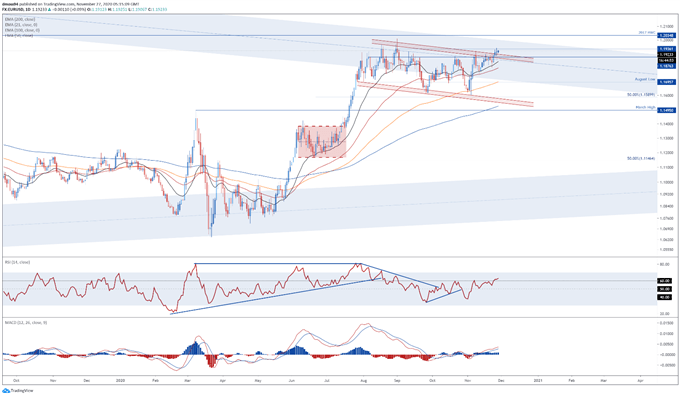 From a technical perspective, EUR/USD rates looks poised to challenge the yearly high, after clearing Descending Channel resistance and the 1.19 mark.

With the RSI eyeing a push into overbought territory, and the MACD rising to its highest levels since late September, the path of least resistance seems higher.

Clearing the August 31 daily close (1.1936) would probably open the door for prices to probe psychological resistance at 1.20. Breaking above that is required to bring the 2017 high (1.2092) into play.

Alternatively, failure to gain a firm foothold above 1.1950 could see EUR/USD fall back towards former resistance-turned-support at the October high (1.1881), with a break below carving a path back towards the 50-day moving average (1.1797). 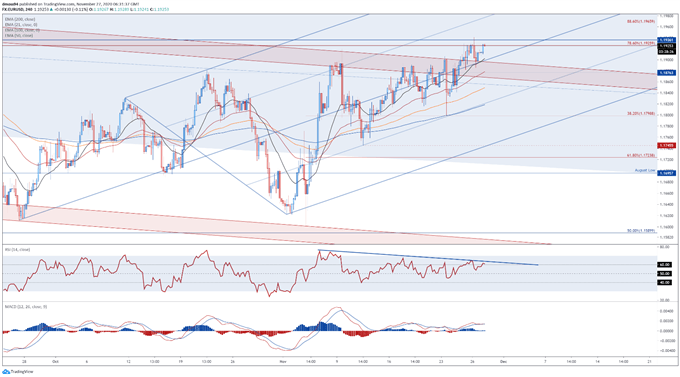 However, zooming into a four-hour chart suggests that EUR/USD could be a risk of a short-term pullback, as prices struggle to hurdle key resistance at the 78.6% Fibonacci (1.1926).

Slipping back below the 1.19 mark would probably generate a push to challenge support at the 50-MA (1.1878). Piercing that could see prices slide back towards the sentiment-defining 200-MA (1.1820).

Conversely, clambering above the November 26 high (1.1941) would likely neutralize near-term selling pressure and bring the 88.6% Fibonacci (1.1966) into the cross hairs. 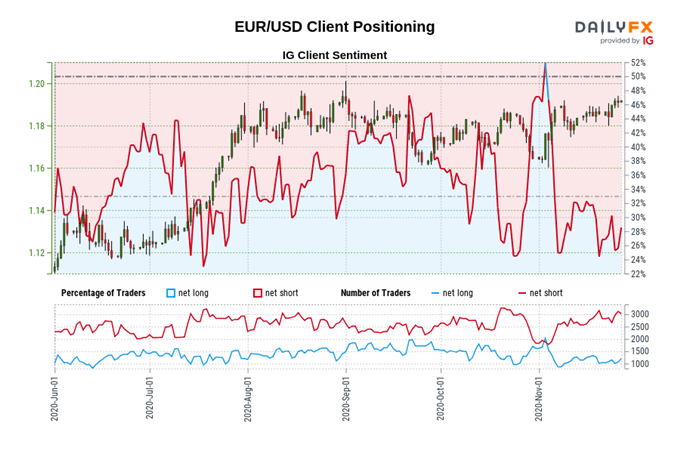