The Australian ASX 200 index clawed back lost ground, climbing 0.33% after collapsing over 3% on Friday while S&P 500 futures drifted lower amid minimal volume. US markets are shut for Labor Day. 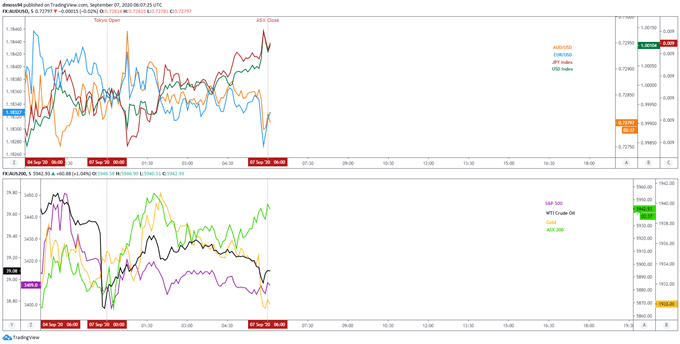 Recent comments from Isabel Schnabel suggest that the European Central Bank is reasonably content with its current policy settings, as the Executive Board member stated that “as long as the baseline scenario remains intact, there is no reason to adjust the monetary policy stance”.

This suggests that the ECB may save its monetary stimulus ammunition at its upcoming meeting on September 10, unless a surge of Covid-19 infections forces regional governments to impose economically devastating restrictions.

However, with the spread between Italian government bonds and German bunds notably widening in recent weeks, lack of action from the central bank may significantly sour investor sentiment and fuel a more substantial decline in regional asset prices. 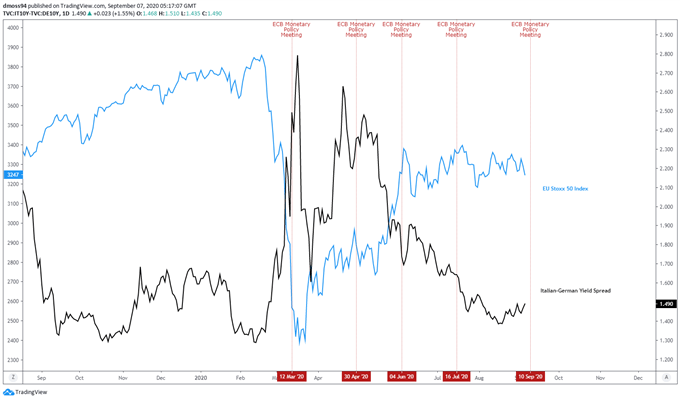 That being said, comments from ECB Chief Economist Philip Lane flagging the Euro’s “repricing in recent weeks” could be a sign that policymakers are becoming increasingly more sensitive to the strength of the local currency and its impact on the trading bloc’s exports. The EUR/USD exchange rate surged to a fresh two year high on September 1 (1.2011).

Nevertheless, while Schnabel believes that “there could be surprises on the upside and the downside, which may mean that we have to reconsider our monetary policy stance”, she confirmed that for the time being adjustment is “not on the cards”.

With that in mind, Europe’s benchmark EU Stoxx 50 index may slide lower if the ECB opts to retain its wait-and-see approach to monetary policy at the upcoming September 10 meeting. 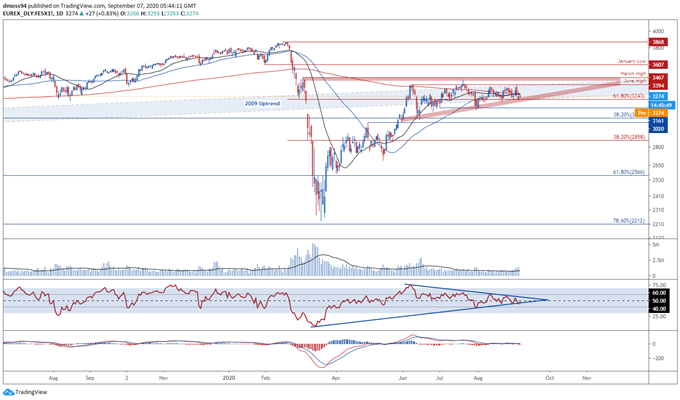 From a technical perspective, Europe’s EU Stoxx 50 index appears poised to slide lower despite carving out a bullish Ascending Triangle continuation pattern just shy of psychological resistance at the 3400 level.

With price tracking below the 21-, 50- and 200-day moving averages and above-average volume seen over the last two down-days, the path of least resistance looks to be lower.

Moreover, the RSI and MACD indicators hint at fading bullish momentum, as both oscillators slide below their respective neutral midpoints and into bearish territory.

To that end, the European benchmark may slide lower in the coming days, if sellers can overcome confluent support at the 61.8% Fibonacci (3243) and Ascending Triangle hypotenuse.