EUR/USD Rates May Rise Ahead of Jackson Hole Economic Symposium

The Australian ASX 200 index climbed 0.52% alongside S&P 500 futures as the haven-associated US Dollar and Japanese Yen lost ground against their major counterparts.

Crude oil nudged higher alongside the commodity-sensitive Australian Dollar, whilst EUR/USD rates bounced back above 1.18.

Looking ahead, US new home sales for July headline a rather light economic docket as investor’s turn their attention to Federal Reserve Chair Jerome Powell’s speech on Thursday at the Jackson Hole Economic Policy Symposium. 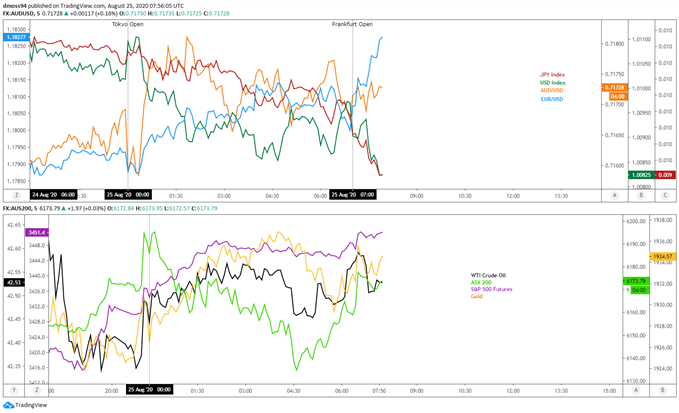 The eyes of the investing world will turn to the Federal Reserve’s annual Jackson Hole symposium on Thursday where Chairman Jerome Powell is scheduled to deliver a speech titled “Monetary Policy Framework Review”.

Powell’s much awaited speech is expected to shine a light on the idea of average inflation targeting, which has been suggested by several Federal Open Market Committee (FOMC) members including Minneapolis Fed President Neel Kashkari, who believes that the central bank “must walk the walk and actually allow inflation to climb modestly above 2%” before rolling back existing stimulus measures.

With policymakers backing away from “providing greater clarity regarding the likely path of the target range for the federal funds rate” at the FOMC’s monetary policy meeting in July, a lack of meaningful guidance from the Fed Chair could significantly sour investor sentiment.

However, this seems relatively unlikely given the Federal Reserve’s commitment “to using its full range of tools to support the US economy in this challenging time, thereby promoting its maximum employment and price stability goals”.

Therefore, with the current US unemployment rate remaining above the peak seen in the 2008 global financial crisis (10.2%) and consumer price inflation still well below 2%, it appears accommodative monetary policy settings are here to stay for the foreseeable future which in turn may continue to hamper the US Dollar against its major counterparts.

Nevertheless, the Greenback could stage a short-term rebound if Powell’s speech disappoints market participants, probably resulting in a marked pullback in EUR/USD rates.

EUR/USD rates continue to consolidate in a Bull Flag continuation pattern just shy of psychological resistance at the 1.19 level.

Hidden bullish RSI divergence, alongside the steepening slopes of the 50- and 200-day moving averages, suggests the path of least resistance is higher.

A breach of key resistance at the psychologically imposing 1.20 level is needed to validate a topside break of the bullish continuation pattern, with the implied measured move indicating a push to 1.22 could be in the offing. 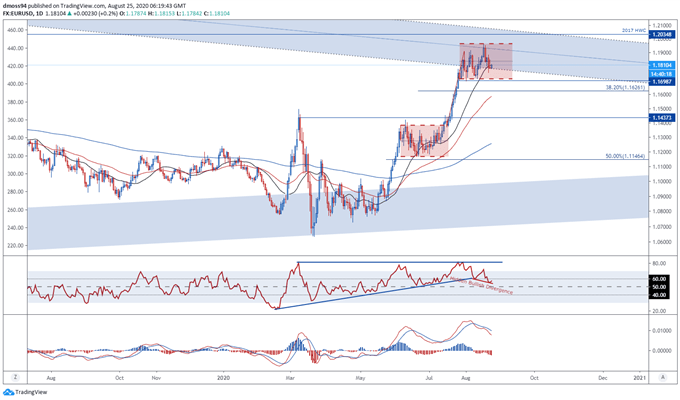