USD Index Outlook: DXY Recovery May Fizzle Out Ahead of US Jobs Data

The Australian ASX 200 index followed the lead set by its US counterparts overnight, falling 0.5% after the Federal Reserve released its monetary policy meeting minutes from July.

The haven-associated US Dollar nudged marginally higher alongside the Japanese Yen, while the trade-sensitive Australian Dollar drifted back below the 0.72 level.

Gold and silver gained as US Treasury yields fell, whilst EUR/USD rates attempted to claw back lost ground after plunging 0.8% yesterday.

The minutes of the Federal Open Market Committee’s (FOMC) July 28-29 meeting temporarily boosted the under-fire US Dollar, as the central bank subtly backed away from “providing greater clarity regarding the likely path of the target range for the federal funds rate”.

In the previous month’s minutes policymakers specified that the Federal Reserve’s future monetary policy decisions would be clarified “at upcoming meetings”, slightly different to the language used in the recent release in which greater clarity would be appropriate “at some point”.

This minimal shift in wording notably soured market sentiment and resulted in the US benchmark S&P 500 index sliding over 0.5% immediately after the release, while the haven-associated US Dollar burst 0.4% to climb back above the psychologically pivotal 93 level.

The central bank also appeared to rule out the implementation of yield curve control (YCC) stating that “of those participants who discussed this option, most judged that yield caps and targets would likely provide only modest benefits in the current environment”.

Unsurprisingly, yields on US 10-year Treasuries jumped almost 3-basis points alongside longer-dating 30-year yields, which nudged up to 1.435% in the wake of the release.

However, the Greenback’s recovery may be limited by the Fed’s commitment to “use it tools and act as appropriate to support the economy”, given the world’s largest economy is still hampered by just under 50,000 new coronavirus infections a day and ideological differences continue to prolong addition fiscal stimulus talks.

Members of the FOMC agreed “that the ongoing public health crisis would weigh heavily on economic activity, employment and inflation in the near term and poses considerable risks to the economic outlook over the medium term”.

This suggests that a worsening fundamental backdrop may result in a drastic response from the US central bank that Vice Chairman Richard Claridastressed will “continue to act forcefully, proactively, and aggressively as we deploy our toolkit [and] do all we can to make sure that recovery from this downturn, once it commences, is as robust as possible”.

To that end, the US Dollar’s may extend its declines against its major counterparts, should high-frequency data continue to show an economy in dire need of additional support. 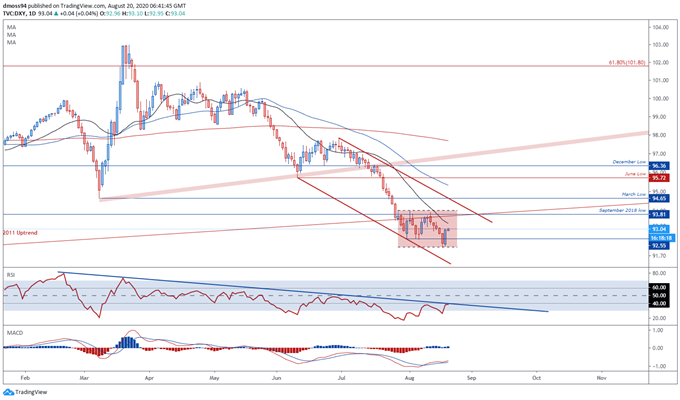 From a technical perspective, the US Dollar index appears poised for further losses, as it carves out a Bear Flag continuation pattern after collapsing through the 2011 uptrend at the end of last month.

That being said, price may rally back to test the September 2018 low before its resumes the primary downtrend, if it can breach resistance at the 21-day moving average (93.37).

A daily close above the psychologically pivotal 94 level needed to invalidate the bearish continuation pattern and may carve a path back to the trend-defining 50-DMA (95.34)

However, a break higher seems relatively unlikely given the RSI remains confined by the downtrend extending from the February extremes, hinting at a lack of bullish momentum.

To that end, a daily close below the monthly low would probably intensify selling pressure and could see price collapse towards the 90 level.