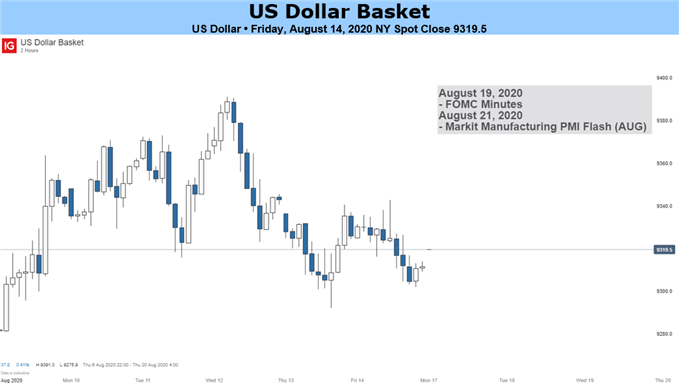 The medium-term outlook for the US Dollar remains tilted to the downside as the Federal Reserve retains its accommodative approach. That being said, stagnating fiscal stimulus talks and the sudden collapse of US-China trade talks may dampen market sentiment and underpin the under-pressure Greenback.

Officials from Washington and Beijing were due to meet for the first review of last year’s phase-one trade deal over the upcoming weekend. The conclave was abruptly cancelled Friday, apparently indefinitely. This comes after weeks of escalation, most recently marked by a US ban on China-based social medial platforms WeChat and TikTok.

The prolonged stalemate between Republicans and Democrats appears to be underpinning the US Dollar against its major counterparts, as the Senate breaks for summer recess despite failing to agree on an additional coronavirus stimulus package.

With US policymakers scheduled to return on September 8, there are growing concerns that the American economy is hurtling towards a fiscal cliff-edge. Enhanced unemployment benefits and a moratorium on evictions expired at the end of last month.

Moreover, weekly jobless claims remain significantly elevated and are suggestive of the potential for an exponential increase in permanent job losses. Continuing jobless claims are hovering at levels almost three times higher than the peak seen in mid-2009.

With both sides of the aisle remaining “trillions of dollars apart” according to White House Chief of Staff Mark Meadows,and House Speaker Nancy Pelosistating that talks may resume “when they come in with $2 trillion”, it appears unlikely that an agreement will be ratified any time soon.

With that in mind, the liquidity-rich US Dollar could benefit from haven inflows if the political impasse continues and economic data begins to reflect a local economy in dire need of additional support.

Having said that, the ultra-accommodative stance of the Federal Reserve may counterbalance the lack of action from Congress and hamper any tentative recovery in the Greenback.

With the central bank remaining “committed to using its full range of tools to support the US economy in this challenging time”, there is a distinct possibility that additional monetary stimulus could be provided in the absence of adequate fiscal measures.

In fact, the Fed’s announcement of a three-month extension of its lending facilities that were scheduled to expire “on or around September 30” epitomizes the committee and Vice Chairman Richard Clarida’sdedication to “continue to act forcefully, proactively, and aggressively as we deploy our toolkit [and] do all we can to make sure that recovery from this downturn, once it commences, is as robust as possible”. 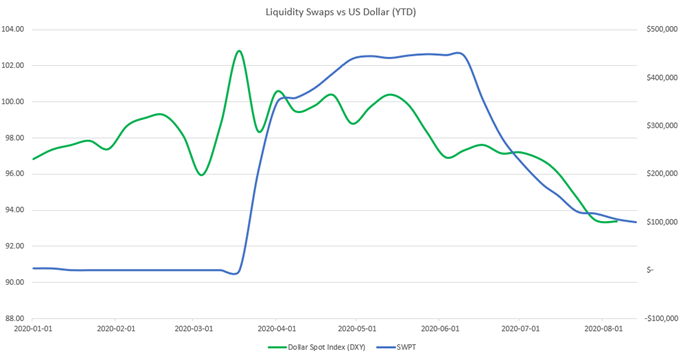 Described by Fed Chairman Jerome Powellas “a backstop for markets”, the central bank’s decision to extend its lending facilities and dollar liquidity swap lines with foreign central banks may suppress potential US Dollar appreciation in the near term.

Tension between the world’s two largest economies has shown marked escalation recently and – with multiple contentious issues threatening to derail Sino-American relations – a period of significant risk aversion is certainly not out of the question.

The White House has been busy trying to calm the markets’ nerves. National Economic Council Director Larry Kudlowloudly stressed that the “one area we are engaging is trade”, adding that China has substantially increased its purchases of US goods.

A further $130 billion in US exports is due in the second half of 2020. That is more than four times the amount purchased by the East Asian powerhouse in the first 6 months of this year, as the coronavirus outbreak has severely hampered international trade.

However, the situation is dire indeed if trade was truly the last area of US-China collaboration as Mr Kudlow implies. That is because a planned bilateral review of the phase-one trade deal that the two sides agreed late last year has suddenly collapsed before even starting.

Reuters cited unnamed sources in a report saying the meeting has been postponed and no new date has been agreed in a report late Friday. While one source suggested the breakdown does not reflect a “substantive problem”, the optics of an abrupt cancellation against the backdrop of broadly building tension seem hardly encouraging.