EUR/USD May Break Down Despite Record 1.3 Trillion in ECB Cash

Preliminary retail sales data for Australia argued for a 16.3 percent rise in May, pushing the local currency higher against its major counterparts, as the haven-associated Japanese Yen and US Dollar declined.

Developments in the US-China trade war after the close of the ASX sent risk assets soaring as Beijing said it plans to set up purchases of US farm goods, after a positive meeting between diplomats from both sides in Hawaii.

S&P 500 futures surged alongside the commodity-linked Australian and New Zealand Dollars, as the US Dollar and Japanese Yen plunged.

Looking ahead, Canadian retail sales for April and speeches from various members of the Federal Reserve, including Chair Jerome Powell, headline the economic docket. 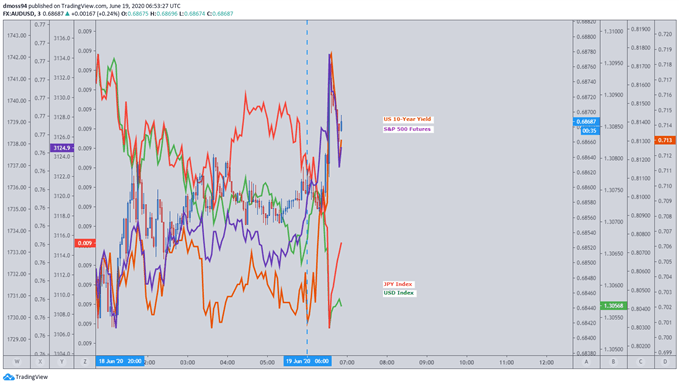 The exponential increase of novel coronavirus cases in several US states continues to fuel secondary outbreak concerns, as Arizona reported its biggest one-day rise and Californian Governor Gavin Newsom moved to enforce the use of face masks.

Outside of the US, China’s coronavirus expert recommended that lockdown measures in Beijing remain until the capital city is “virus-free for at least two weeks” and Italy recorded an increase in cases above the 7-day average.

A continued climb in cases as economies gradually emerge from hibernation may fuel risk aversion moving forward, with an increase in local hospitalization rates possibly triggering a retreat from risk-associated assets.

In line with forecasts of an uptake “in the order of €1.4 trillion”, ECB Executive Board member Isabel Schnabel announced the European Central Bank injected credit markets with €548.5 billion of liquidity overnight, as TLTRO III.4 (as mentioned in yesterday’s preview) resulted in 742 banks borrowing a total of 1.3 trillion in 3-year loans to “support lending to the real economy”.

Targeted long-term refinancing operations (TLTROs) with “rates as low as -1%” result in the central bank essentially paying lenders to ensure they continue to provide credit to companies and households, as the Eurozone attempts to recover from its steepest contraction on record. 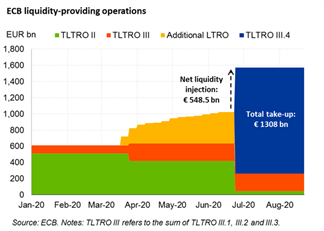 Risk appetite may be fuelled by the confirmation of adequate demand to “reduce the potentially adverse impact of tightening market-based funding conditions on lending” as Italy’s largest bank, UniCredit, and four of the five biggest banks in Spain borrow the maximum amount available to support their local economies.

Yields on Portuguese, Italian and Spanish 10-year government bonds reinforce this sentiment, declining to the lowest levels since March as the flood of liquidity helps to stabilize the Bloc’s higher-risk credit markets.

However, this surge of liquidity and easing of regulations does come with a degree of risk should the economic recovery shudder to a halt, as the increasing accumulation of sovereign debt could lead to a situation similar the 2012 debt crisis. 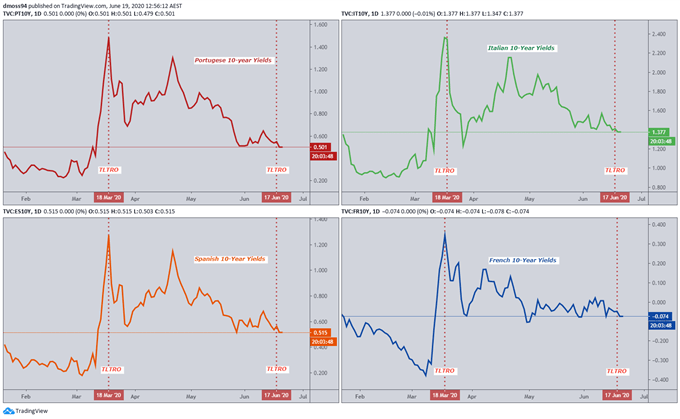 Euro Perched at Support as the RSI Tests Key Uptrend

EUR/USD continues its slide towards its 6-week uptrend after slicing through range support extending from the December highs (1.1220 – 1.1240).

With the momentum indicator snapping its constructive uptrend, there remains a bearish tilt to price as the RSI falls back to its lowest levels since early May.

The RSI may provide an early indication of future direction as a breakdown of the uptrend from late-February could possibly ignite selling pressure. 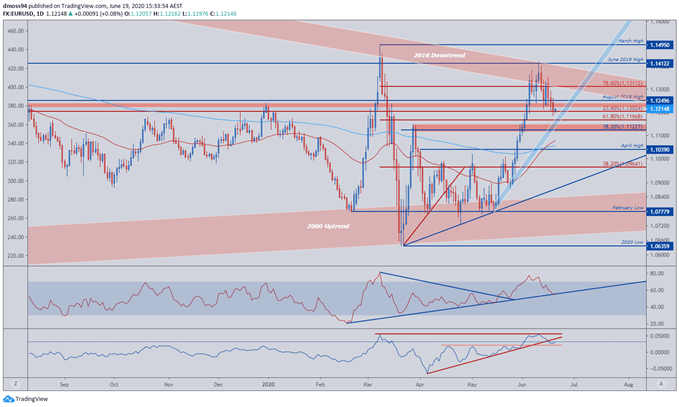