It’s already been a climactic year for USD/CAD and we’re not even 2/3rds of the way through. The year started off as somewhat of an outlier as USD/CAD kicked off 2020 below the 1.3000 psychological level that sellers seemed so reticent to test for the bulk of last year. But that weakness didn’t last for long, and buyers soon came in and the first two-and-a-half months were marked by an aggressive up-trend, with USD/CAD gaining more than 1700 pips.

USD/CAD came within 25 pips of the 17-year high in late-March, and that’s when the proverbial music stopped. Since then – the pair has spent much of the time since giving back those early-year gains, with current price action very near the 78.6% retracement of the recent major move. 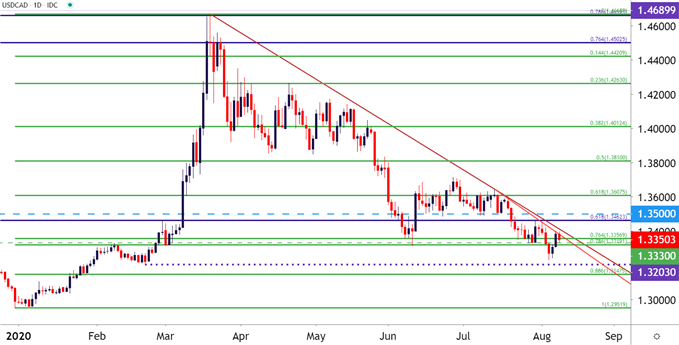 Of recent, the big question has been sustainability of the current down-trend. As noted a couple of weeks ago, a recent entrance of USD/CAD weakness has helped to buffer that move of USD-weakness in the pair. As USD-weakness showed visibly in major pairs such as EUR/USD and AUD/USD, USD/CAD was instead showing a bit of stalled or slowed price action.

That observation from late-July may have relevance with current dynamics: In late-July, the USD/CAD sell-off stalled just ahead of a test of the June swing low. This stalled the pair long enough for prices to pose a quick retracement to resistance, which showed around 1.3462 which is the 61.8% retracement of the 17-year move. Sellers came back last week, helped along by an aggressively bearish theme in the US Dollar, and similar to what happened in late-July, sellers stopped short of a significant swing low long enough for a retracement to develop. Friday price action ran into a bearish trendline connecting July 19th and August 3rd swing-highs, and so far that trend-line has helped to hold the advance. 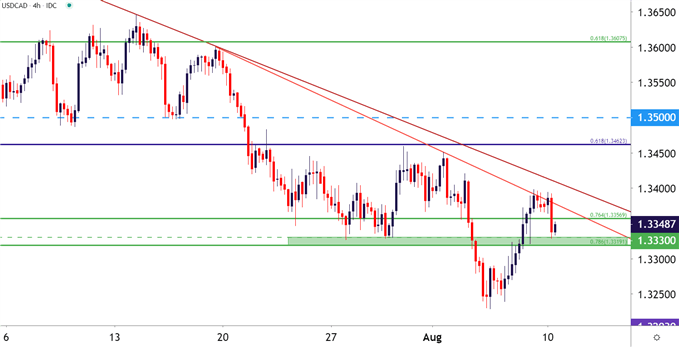 Given the harboring Canadian Dollar weakness, USD/CAD may remain as attractive for themes behind USD-strength; whether that’s a short-term pullback or a longer-term reversal. While the downtrend in USD/CAD is still intact to a degree, the slower trend-side movement than what’s shown in other USD-pairs may act as a constraint for short-USD strategies.

For those that are looking for bearish continuation in USD/CAD, a key zone of support appears around the 1.3319-1.3330 area; and a breach below this area can open the door for a retest of the 1.3250 area, after which the 1.3200 area comes into view, which had last helped to set support in February of this year. 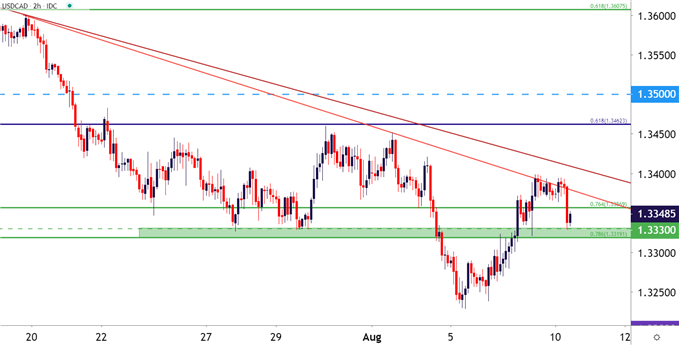