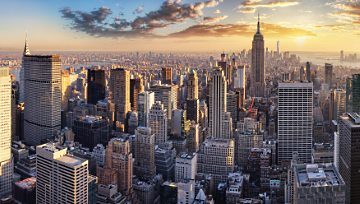 US Dollar, Euro Pull Back Ahead of US CPI

- The US Dollar is showing mean-reversion tendencies near resistance, and the Euro has pulled-back from the sell-off that punctuated this week’s open as we approach tomorrow’s release of September inflation numbers out of the United States. The expectation is for a 2.4% print, so the bar is set very low considering last month’s 2.7% and the June and July prints of 2.9%.

- Risk aversion is a bit more quiet this morning in FX-land as both the US Dollar and the Euro have cooled; but selling pressure remains in European stocks as shown in the DAX. We’re not yet out of the woods on the scenario surrounding Italy, so much attention will likely be paid to European markets in the coming weeks to see whether risk aversion themes continue, or whether we see markets step back from the proverbial ledge as was seen in the May/June and again in mid-August.

US Dollar Holds Support Ahead of CPI

Tomorrow morning brings to markets the big item on this week’s economic docket, and that’s the release of September inflation numbers out of the United States. There’s been quite a bit of encouragement around this theme of late as inflation has continued to hold at-or-above the Fed’s 2% target now for 11 months. The bigger question is whether continued inflationary strength in the US will actually push the value of the Dollar higher, as the recent topside run in USD appears to be more-driven by dynamics of risk aversion than it does monetary policy implications.

Last month saw the first moderation in the indicator since December of last year. We were on a steady track of growth higher until last month printed at 2.7% versus a 2.8% expectation, and that was released on the heels of two consecutive months at 2.9% in June and July. Tomorrow is expected to bring more of the same, as September CPI is expected to print at 2.4%. 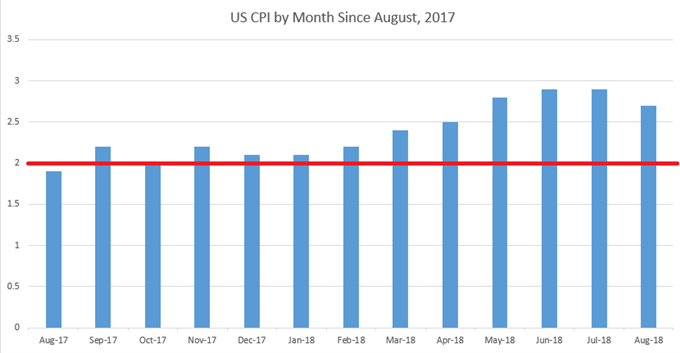 The big driver of Dollar strength of recent has appeared to emanate out of risk aversion, specifically looking at dynamics in Europe and around the Euro as concerns around Italy have continued to grow. This isn’t the first time that we’ve seen these concerns driving prices, as the April-May sell-off in the Euro was very much driven by fears around Italy. At the time, two Euro-Skeptic parties were elected to power in Italy, and the backdrop started to build for a showdown between Italy and the European Commission.

At issue is Italy’s budget. The EC wants to limit Italy’s 2018 budget to a 1.6% deficit. The Italian government wants a 2.4% deficit so that they can use extra funds to rebuild infrastructure and institute growth-oriented initiatives.

The big issue around the budget is Italy’s debt, as the European Commission wants to see debt at 60% of GDP at a max. Italy is nearing two times that amount. So, if the country is going to continue running larger deficits, that would require additional debt to fund those budgets, and that brings even more risk of even more leverage with an larger Debt-to-GDP ratios.

This tension has taken a toll on the Euro and, in-turn, pushed the US Dollar up to fresh highs. EUR/USD pushed down to a fresh seven-week-low to start this week; and over the past 24 hours prices have posed a pullback in that bearish trend. At this point, we’re currently seeing prices hold at resistance inside of the 1.1530 level.

We looked into this as part of our FX Setups of the Week. EUR/JPY had built into a descending triangle formation inside of a longer-term bull flag, and shortly after the open of this week the bearish setup from the triangle break triggered as prices ran down to fresh three week lows. Prices continued to slide on the support side of the channel that made up the bear flag formation, and after catching a bounce yesterday, prices have started to move towards the resistance side of that formation.

This is setting up a showdown at a big zone. The area of prior support that runs from 130.58-130.77 is now confluent with the resistance side of the channel. A hold of resistance here keeps the door open for short-side strategies. But – if we break above, we may soon be looking at a return of strength as a topside break of a brewing bull flag formation would re-open the door for bullish strategies.

US Dollar: Mean Reversion in DXY as Support Holds Above 95.53

The Dollar’s pullback from yesterday held support above the key level of 95.53 – but bulls were also unable to hold the prior swing-low from around 95.68 which would’ve kept the door open for short-term trend strategies. At this point we have a range near resistance punctuated by yesterday’s seven-week highs.

The British Pound continues to show signs of strength, particularly during those period of USD-weakness over the past week while that range has been building near resistance. This has helped to push GBP/USD up to an area that had previously produced resistance in late-August. Bulls appear to be facing a bit of pressure off of that zone after failing to push through yesterday, and this keeps the door open for a pullback down to prior support to keep the door open for topside approaches.