- The U.S. Dollar faced another sell-off this morning, pushing prices back down towards the 2018 low.

- While yesterday’s report that China may be looking to slow or halt Treasury purchases was refuted, U.S. Dollar sellers appear undeterred, as that rebuttal merely brought on a lower-high in near-term USD price action.

In yesterday’s article, we looked at a sell-off in the U.S. Dollar after a report began to circulate indicating that China may be looking to slow or halt purchases of U.S. Treasuries. This brought on a quick spike in US rates along with a dive-lower in the U.S. Dollar; but as we moved deeper into the U.S. session, calm prevailed and the sell-offs reversed in both Treasuries and USD. Later yesterday, China looked to refute those reports: The State Administration of Foreign Exchange dismissed the assertion that they may be looking to slow or halt Treasury purchases while saying ‘The news could quote the wrong source of information, or it may be fake news.”

This helped to bring prices in the Dollar (DXY) up towards that area of resistance that we’ve been following around 92.60, taken from the December swing-low; but sellers showed-up at 92.55 to produce a lower-high on the chart. This, when coupled with the higher-low that printed around yesterday’s reversal, indicates congestion as we move towards two really big reports tomorrow with the release of U.S. CPI and Advanced Retail Sales figures. 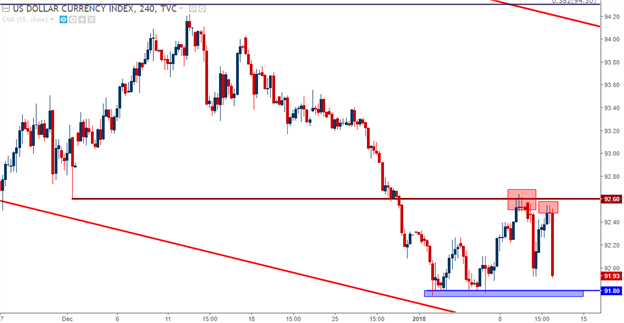 On net, this leaves a fairly messy setup on the U.S. Dollar’s daily chart. The trend channel that guided price action for much of last year in the Greenback remains in-tact, but we’re nearing what’s been a fairly strong area of longer-term support. The Dollar fell down to 91.01 in September of last year, at which point a recovery showed all the way into November. But, after sellers came back in November to re-grab control, prices drove all the way down to 91.80 shortly after the open of the New Year. That support, so far, has held-up, with yesterday’s sell-off producing a ‘higher-low’ when buyers came in around 91.92. 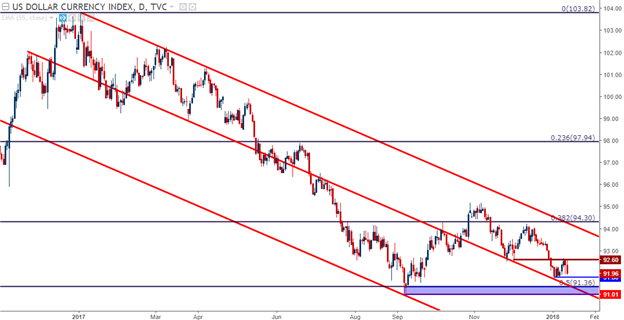 The big question as we near tomorrow’s data is whether or not the Dollar can put in any form of trend. Earlier in the week, the U.S. Dollar was rallying, all the way until prices ran into that prior support swing around 92.60. After resistance set-in, that report from yesterday helped to bring on another bearish move, but after prices recovered a bit, another lower-high showed up around the open of the Euro session.

Traders looking to take a directional approach on the U.S. Dollar will likely want to allow for a break of this current range, running from the rough values of 91.80 up to 92.60. A support side break opens up the possibility of deeper short-side targets, towards the Fibonacci level at 91.37 along with the 2017 low at 91.01. 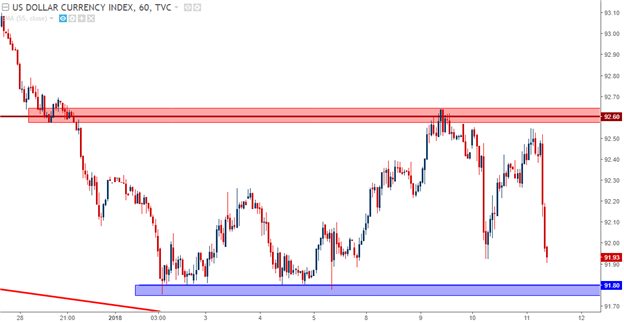 Also in yesterday’s article, we looked at EUR/USD interacting with the 1.2000 level after that report began to circulate, and we showed how this prior area of support was producing an element of resistance. Prices trickled-lower by about 70 pips, all the way into this morning when minutes from the December ECB rate decision were released to markets.

The minutes from that December meeting, which was the first meeting after the bank elected to extend their QE program into September of this year, appeared to indicate a growing warmth towards the removal of QE. The bank indicated that they could gradually adjust its language in response to the improving growth prospects for the Euro-Zone economy, and this will likely be taken as a signal that the bank is preparing to step away from QE when the current program comes to expiration later in the year.

The net response was a re-ignition of that bullish move in the single currency, and EUR/USD has now re-ascended back above that 1.2000 level. 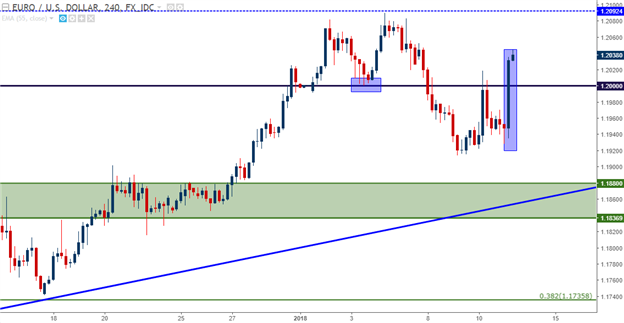 This puts EUR/USD in a rather tough spot as we approach two really big US data items tomorrow. Given the fact that we may have just had our first indication of a potential signal, perhaps we can call it a ‘mini signal’, that the ECB may be looking to step away from stimulus later in the year, and we may have a factor that could potentially continue to drive the bullish move in the single currency. But – this is still very early, as it was just yesterday that we saw prior support show as fresh resistance, indicating that bulls weren’t yet ready for continuation, so the deductive fact that we are getting that today would seem to indicate that much of this is on the basis of those ECB minutes.

So, rather than chase, traders can look for a reaction tomorrow in the U.S. Dollar to produce some element of support in EUR/USD. Support at that level of 1.2000 could be very interesting for such purposes.

Also of interest around the Euro, and a potential way of looking at bullish Euro exposure without having to take on risk in the U.S. Dollar is EUR/JPY. We discussed the setup in yesterday’s technical article, and we pointed out a couple of interesting areas of support. A trend-line projection that can be found by connecting the August low to the November low projects very near current price action, helping to produce yesterday’s low. And just below that, we have the big zone of support that held up in the pair for most of Q4.

After that trend-line inflection and as those ECB minutes were circulating into markets, price action in the pair put in a strong bullish move to approach a key area of resistance. This level at 134.41 is the 61.8% retracement of the 2014-2016 move in EUR/JPY, and this gave three different instances of resistance in the latter portion of last year. 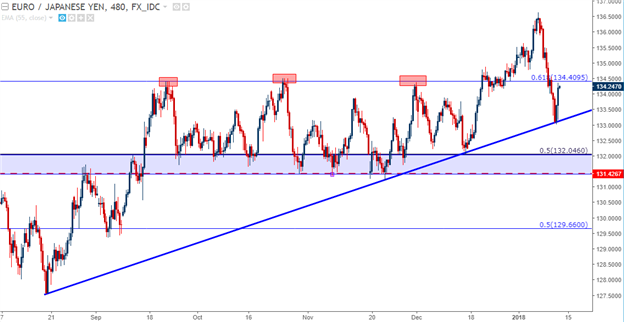 On shorter-term charts, this bullish move is key because it’s finally broken the streak of losses that’s been seen in the pair since last Friday’s NFP report. With short-term higher-highs posting, the possibility of bullish continuation has begun to look a bit more attractive. On the hourly chart below, we’re looking at two potential short-term areas of support, derived off of prior swing-highs that could assist with the topside approach. 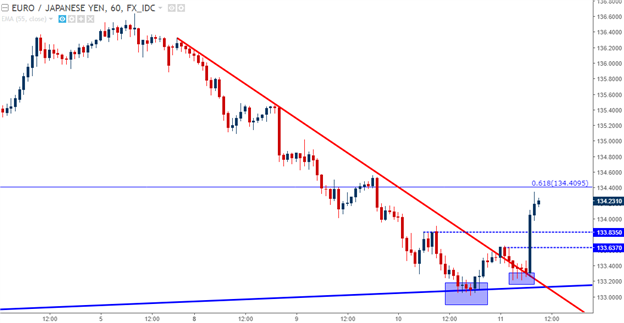