- Last night brought a shocking result in the U.K. election; but perhaps an even more shocking outcome was what didn’t happen to the British Pound. Our own Christopher Vecchio walked through the situation in an aftermath webinar this morning along with short and medium-term outlooks for GBP, please click here to access that video in its entirety.

- We’re likely not ‘done’ with GBP volatility just yet, as a Bank of England meeting sits on the calendar for next Thursday, and this is on the heels of a Fed meeting on Wednesday that brings a large expectation for an interest rate hike. We also hear from the Bank of Japan in a week that is expected to be very busy on the Central Bank-front.

In a shocking result around yesterday’s U.K. elections, we saw what was widely considered to have been the worst possible outcome from yesterday’s vote as no party gained a majority. This was a failure of Theresa May’s gambit to gain a stronger majority for her Tory party heading into Brexit discussions, and this seemingly serves to add a considerable amount of confusion to an already confounding situation.

Despite this additional uncertainty being driven into U.K. politics around Brexit, the British Pound held up fairly well, all factors considered. Most prognosticators estimated that a hung parliament would drive GBP/USD towards 1.2200-1.2300. That hasn’t happened, at least not yet, as buyers showed up above the 1.2600-handle. 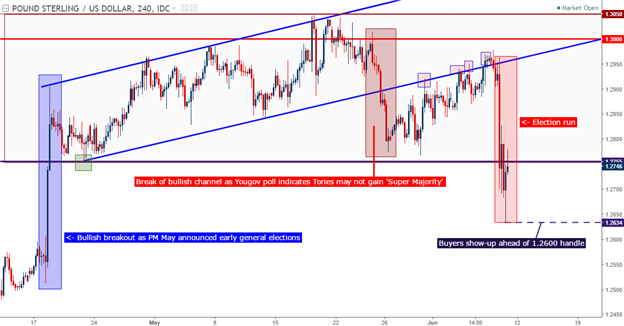 Currently, it appears that the Conservative party will form a coalition with the North Ireland Democratic Unionist Party. This would likely entail a ‘softer Brexit’, as discussions with the EU begin in a mere 10 days.

But don’t go setting those annual forecasts just yet: Next week brings a Bank of England meeting, and for a Central Bank that’s generally countered uncertainty with more dovish action, language and posturing, it would appear that we’re nearing prime time for Mr. Mark Carney to offer some ‘guidance’ around how the bank is expecting to shape policy in consideration of this newfound uncertainty. In mid-May at the most recent ‘Super Thursday’ from the BoE, markets saw another iteration of the bank’s dovish stance. But unlike previous dovish outlays from the BoE, the British Pound remained relatively strong, continuing with the bullish channel that had showed-up after Theresa May’s announcement of early elections in mid-April. Will another iteration of BoE dovishness push Cable lower? Shorter-term charts are seeing some element of resistance come-in at a familiar level around 1.2750; as this had previously been resistance in the six-months long range, eventually becoming support after the breakout; and now showing back-up as a potential area of ‘lower-high’ resistance. 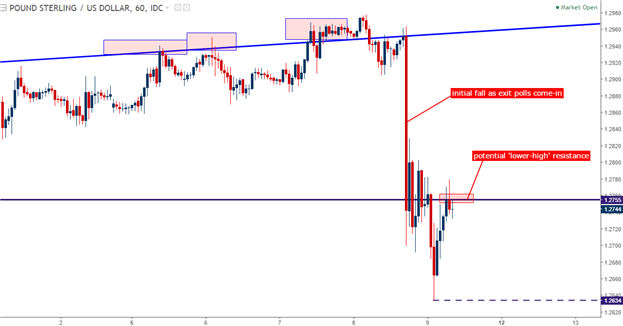 Also on the docket for next week is a Fed meeting with the large expectation for an interest rate hike. The past few days have brought a very dovish ECB meeting along with the shocking results from last night’s UK elections; and collectively this has provided a dash of strength in the Dollar.

Given that this hike is widely expected and likely ‘baked in’ to price action to a large degree, the big question for the Fed is what the bank is planning on doing around balance sheet reduction, and when they might be looking to do so. We’ve previously heard the Fed mention the topic of balance sheet reduction, in the minutes from the last rate decision; and we have some initial parameters on how they might look to do it, but we still don’t know the pertinent facts of when and how much.

Balance sheet reduction can be a very pertinent factor here for price action in USD, because if the Fed does go down this route after raising rates to a certain level, balance sheet reduction would be de facto tightening of the money supply without the accompanying higher rates. Higher rates, of course, are what generally drives demand into a currency, thereby producing that synergistic scenario of higher rates leading to stronger trends, much like we saw in Q4 of last year as U.S. rate expectations were shooting-higher. But now that we know that the Fed might be looking to tighten the money supply by reducing their $4.5 Trillion balance sheet rather than paying higher rates, there’s a very valid reason for continued USD weakness should the Fed talk up this prospect.

On the chart below, we’re looking at this recent move-higher in the Greenback after the 1-2 punch of yesterday’s ECB announcement and U.K. elections: 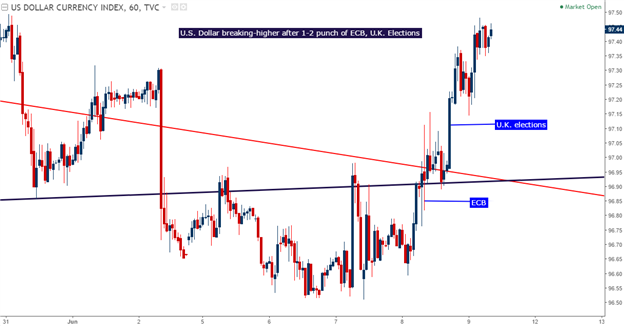 Also of interest on next week’s calendar is a Bank of Japan interest rate decision. The last rate decision out of the BoJ saw the bank take a familiar dovish stance as they said that they weren’t yet thinking of exiting stimulus, citing many of the same reasons from the ECB’s President, Mario Draghi. While inflation has begun to show in Japan, core inflation continues to lag and wage growth remains subdued. But just weeks after that most recent BoJ meeting, Governor Haruhiko Kuroda said that he didn’t feel that the BoJ would have much trouble exiting stimulus when the time came. This helped to set a top in USD/JPY (a low in JPY), as a Central Banker talking about exiting stimulus is obviously a Central Banker that’s thinking about exiting stimulus.

Since then, the Yen has remained strong as USD/JPY put in a break of the vaulted ¥110.00-level just a couple of days ago. Will next week’s BoJ meeting see Governor Kuroda echo those dovish calls of recent meetings? And the bigger question – will markets respond by offering the Yen lower? 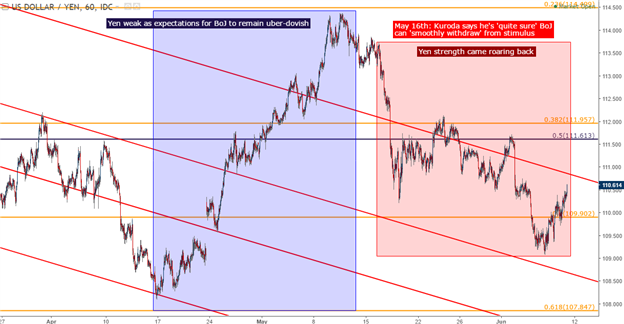