Price Action in USD is Aligning for Bullish Continuation

- The one-two combo of Chair Yellen and Mario Draghi helped to re-lift short-term price action in the U.S. Dollar over the past 24 hours. And this brings the potential for short-term momentum in the Greenback to line up with the longer-term bullish up-trend.

- With the Inauguration of President-Elect Donald Trump taking place tomorrow, traders will likely want to be on-guard as markets have been extremely sensitive to any innuendo from the President-Elect. This can create a rather illiquid environment that can further drive volatility.

In yesterday’s article we looked at how the U.S. Dollar retained a bullish long-term setup, but on short-term charts matters were quite different. Near-term price action in the U.S. Dollar has been markedly bearish since shortly after the open of the New Year. And this is fresh on the heels of a near-historic run in the Greenback on the heels of the U.S. Presidential Election.

In reality – not much has changed over the past two and a half weeks, outside of short-term price action, of course. The one item that might stick out as a potential driver for USD-weakness could be President-Elect Trump’s comments against the ‘strong Dollar policy’ in an interview a couple of days ago; but given the executive branch’s lack of control over monetary policy (Executive branch of the U.S. Government impacts fiscal, not monetary policy) those comments might not be as relevant as what we might hear from Fed Chair Janet Yellen. And yesterday Chair Yellen offered comments that were broadly supportive of further rate hikes this year, echoing the bank’s sentiments from their December rate move in which they also said they were expecting three hikes in 2017.

The net response was a burst-higher in the Greenback as Chair Yellen was speaking, helping the currency to break back above a prior point of ‘lower-high’ resistance that had contributed to defining that bearish near-term directional stance yesterday. From the 15-minute chart below, we can see short-term price action in the U.S. Dollar attempting to move in to a more bullish-state by breaking up to fresh higher-highs and higher-lows, helped in large part by Chair Yellen’s speech yesterday. 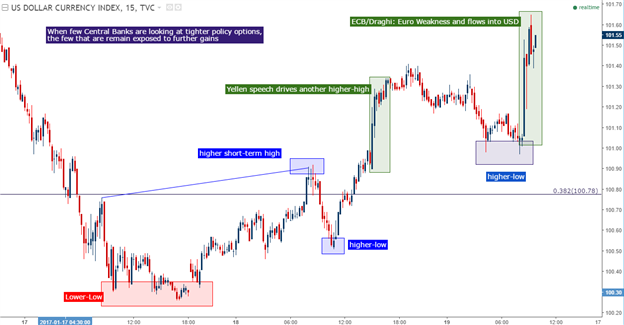 For those that want to move towards the U.S. Dollar in a bit more of a conservative manner, and given the possible shake-up across markets around tomorrow’s Presidential Inauguration that could be a logical way of going about matters right now, there’s a longer-term level of potential resistance that traders can use as a ‘litmus test’ to decide whether this short-term burst higher may have the sustainability to continue to align with that longer-term, bullish up-trend.

On the chart below, we’re looking at the Monthly chart of DXY to represent the U.S. Dollar, with focus on the 61.8% retracement of the 15-year move in the Greenback. This level at 101.80 was briefly breeched in December and again in January; but as of yet markets haven’t been able to find the motivation to drive the Dollar significantly above this zone of resistance. 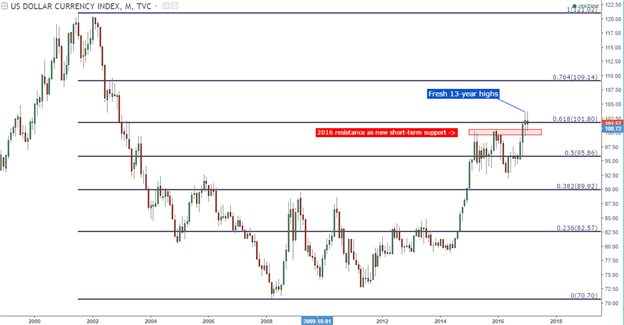 And on the chart below, we move in a bit closer to look at the Daily setup. Resistance from last year is showing up as near-term support around the 100-level on DXY. But of specific importance to this medium-term observation is the fact that the 61.8% retracement of the 15-year trend was breeched, albeit temporarily when the Federal Reserve hiked rates in December. Price action held above this level for a couple of weeks, but motivation was lacking to drive the currency further-higher, and after a near-historic run after the U.S. Presidential election – it makes sense that sentiment had gotten a bit overbought. But as we mentioned previously – this does not mean that the trend is over.

Given the fact that we’ve seen a short-term higher-low show up as we looked at above, price action breaking above this level at 101.80 could align short, medium and longer-term observations on the U.S. Dollar in order to look at what could be a very attractive continuation-pattern. This would also have the benefit of a sensible macro backdrop that could continue driving the U.S. Dollar-higher as the Federal Reserve is simply one of the few major Central Banks investigating tighter policy options. 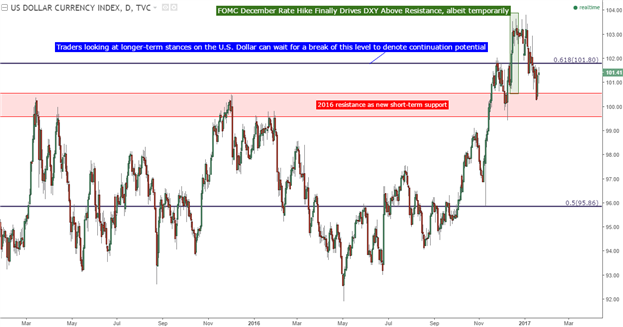