- The ‘Trump Bump’ continues to drive price action, with fresh 13-year highs printing in the U.S. Dollar, and new all-time highs showing in DJIA during the overnight session.

The post-Election rally continues to drive price action across global markets with continuation moves being seen in key areas like the U.S. Dollar, non-Tech U.S. Stocks and the even the Japanese Yen. And for a world that has gotten so comfortable with the ‘Fed Feedback Loop,’ the fact that traders are driving for higher-highs in both the Greenback and Stocks at the same time might be a bit disconcerting.

The Fed has been trying to hike rates for well over a year now. After ten years without a hike and rates staying near-zero, American companies have gotten very comfortable with the ‘extremely accommodative’ operating environment brought upon by the Federal Reserve’s ‘emergency-like’ monetary policy. But this isn’t a long-term strategy: Such low rates bring upon risks to savers, retirees and pretty much anyone that depends or will depend on interest rates at some point in their lives. And with demographic trends of retiring baby-boomers combined with declining labor force participation rates, this isn’t something that can last for too much longer. Social Security, Medicaid – these are very real problems that are made even more problematic by continued near-zero rate policy. So, there’s a very real drive to want to kick rates higher; the only problem is that each time the Fed has tried to do that over the past 18 months, equity markets have fallen and the headlines have been rife with ‘2008 all over again’ types of headlines.

This has created what many market participants call ‘The Fed Feedback Loop.’ This is when the Fed will talk up the prospect of higher rates while stocks are at or near highs, only to backtrack and get dovish after stock prices soften or sell-off. Effectively, this presents the situation in which equity market prices are loosely driving interest rate policy, and this is far from the design of what the Federal Reserve is supposed to do. At the center of the argument is ‘The Wealth Effect’ and how this may impact income inequality, but that’s another topic for another article.

Pertinent to our current demands, however, is the price action setup in the U.S. Dollar. In the wake of the U.S. Presidential Election, the U.S. Dollar has driven to fresh 13-year highs. Stocks are also driving to fresh highs, with the Dow Jones Industrial Average setting another new all-time high in the overnight session. Given that stock prices are near-highs, this could be an ample opportunity for the Fed to kick up that next hike, and markets are currently pricing in a near-100% probability of a move-higher in December. More pertinent, however, will be what the Fed says about their plans for rate hikes in 2017. Last year, the Fed posed the first hike in over nine years when moving rates up in December. But they also said that they wanted to hike rates a full four times in 2016, and within weeks of that rate hike equity markets had collapsed for fear of rates tightening too quickly while the global backdrop (Chinese markets) remained weak.

On the chart below, we’re looking at the past 15 years of price performance in DXY, representing the U.S. Dollar. And below that, we’re looking at various ways that traders can look to position around the Dollar in the coming days/weeks.

With USD currently sitting at fresh 13-year highs, traders would likely want to wait for a pullback to support before looking to add long exposure.

This is a setup that we’ve been talking about for a couple of months as the pair dug-in support around the 100-level. And this has been one of the more attractive venues to voice long-USD trades in the post-Trump environment, looking to play divergence between the U.S. and Japanese economies. USD/JPY is up over 800 pips since the lows of election night, and given the prospect of continued divergence between the U.S. and Japanese economy, particularly in a long-USD, rising rates scenario, this pair can continue to be attractive.

Another pair with the prospect of continued monetary divergence between parent economies in the scenario of continued USD-strength is USD/CAD. Just a couple of weeks ago, Stephen Poloz of the Bank of Canada mentioned during a press conference at a rate decision that the bank had discussed monetary stimulus. This immediately prodded CAD-weakness as markets priced-in the prospect of stimulus down-the-road. Mr. Poloz tried to backtrack a few days later, giving a scope of ‘around 18 months’ for any potential future action, but by then the cat was already out of the bag and hopes for more stimulus kept the CAD weak. Should the U.S. Dollar continue higher, this can be another attractive venue to attain long-USD exposure. 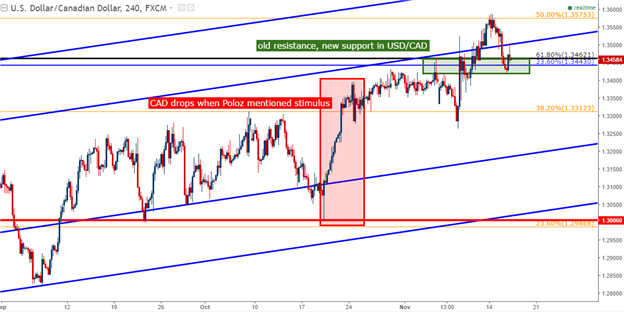 Short-USD is going to be a bit more difficult to work with at the moment given how strong the U.S. Dollar has been; but given this recent bout of strength, we can deductively find areas that could be attractive in the event that this theme of bullish USD doesn’t continue.

While USD is setting fresh 13-year highs, USD/CHF is moving back towards resistance levels seen in March, illustrating an addition of some Swiss Franc strength here. The pair had been in a very consistent range over the past six months, with resistance at the .9950-area giving a couple of different inflections. But with the rampant run in the Greenback over the past week, that zone of resistance is being tested and prices are running higher.

In March, USD/CHF set a swing-high at 1.0092, and as long as price action continues to respect this high, traders can watch for resistance with the aim of trading the pair-lower.

This is another area that may be deductively showing us something given the fact that the past couple of days have seen higher-highs on the Dollar, yet Gold prices have remained supported. Should the Fed backtrack or should USD weaken on the prospect of continued loose monetary conditions, Gold prices could certainly get bullish again.

However, it would appear that we’re not at a junction in which the Fed will get dovish all of the sudden. And given how sharp Gold prices have moved this year around the Fed, traders may want to wait for a ‘blow off’ move that sees prices move lower before looking to buy support.